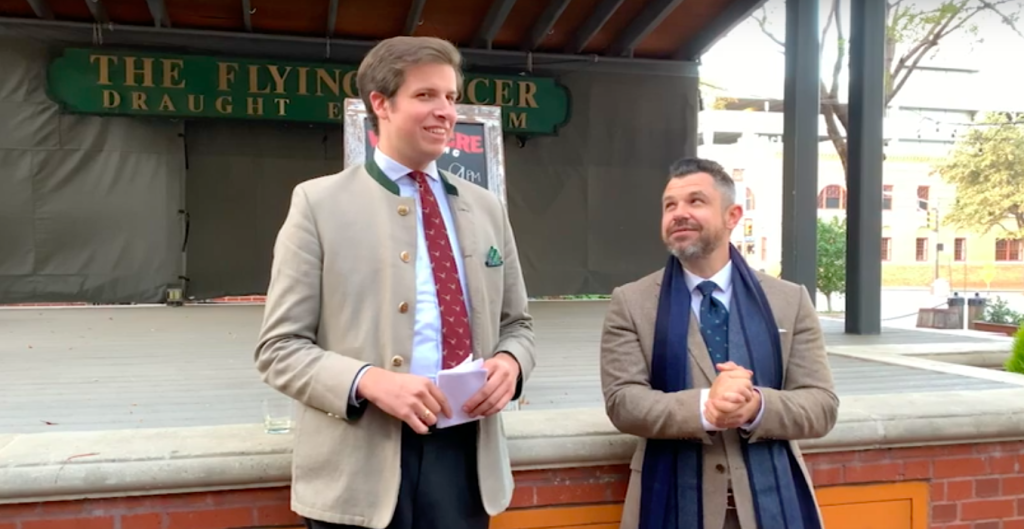 Dr. Taylor Marshall, charter member of Trad, Inc., isn’t the slimiest of that lot – a distinction that belongs to any who would deliberately play both sides of important issues in order to maximize personal income – but he’s certainly not a straight shootin’, truth tellin’ choir boy rendering selfless service to the Church either.

His apparent motto and field of expertise? ABM: Always Be Marketing.

As reported by LifeSite News, another charter member of the aforementioned mockingbird media movement, Marshall recently revealed that he was secretly in cahoots with Alexander Tschugguel, the celebrated Pachamama-slayer-turned-prophet:

Dr. Taylor Marshall revealed in a March 27 interview with Alexander Tschugguel, the young Austrian man who removed the pagan idols from the church and threw them into the Tiber, his role in the story for the first time. Marshall not only helped plan the purge, but he provided funds to see it accomplished (see comments beginning at 106:41 here).

Do click on the link provided. What you’ll see, if you can stomach it, is great theater. Otherwise, just follow the transcript below:

Marshall: Everyone knows you as the guy who threw the Pachamama idols in the river and we, we thank you again for doing that, that was a great, a great moment of a victory and joy. [Nota Bene: At this point in the interview, Marshall’s stuttering mention of the Pachamama drowning comes out of left field; it’s well out of context with the banter that preceded it.]

Tschugguel: Isn’t now the time to, to tell people a little bit about, about how we were in contact?

Marshall: [With sheepish grin appearing even as Tschugguel is speaking] I guess perhaps we can, uh, uh, I wasn’t prepared for that, but yeah…

Marshall then proceeded to come clean, revealing for the first time that he played an integral role in the drowning of those hideous idols. The real story here, however, is that Taylor Marshall has outed himself as a self-promoting phony.

For months on end now he has been putting on an act with regard to the Pachamama drowning event, behaving as if he, like everyone else, initially had no idea who performed that surprising but welcome act.

He joined his voice to others wondering (pretending to wonder, that is) if the hero’s identity would ever be made known, but only after taking pains to make certain that everyone knew that it was he who broke the story first (more on that in a moment).

And when at last Alexander Tschugguel stepped into the limelight (another orchestrated event) and right onto Tayler Marshall’s stage, and on the very same day he went public, the latter was pleased to let viewers believe that his was the go-to outlet among many that Tschugguel just happened to grace with an interview.

Knowing what we know now, the opening of that interview (HERE) is disgusting:

Marshall: I’m here with Alexander Tschugguel. Did I say that correctly Alexander? … Alexander welcome today, thanks for coming on with me.

Tschugguel: Thank you very much Taylor, for inviting me. I’m very glad we can talk about it in a very nice way.

Yes, nice and phony. It’s obvious already that Tschugguel, for his part, is cut from the same cloth as Marshall, but we’ll come back to that later as well.

Now, we are being asked in this latest video to believe that Marshall, out of nowhere, just happened to interject the Pachamama incident into the conversation, and Tschugguel took Marshall utterly by surprise in calling him out, thus moving his humble host to reluctantly fess up to his role in the affair, even though he wasn’t prepared to do so.

If you believe that, you probably also believe that Coronavirus began when some hungry Chinaman decided to snack on a bat.

In telling of his role in the great Pacha-heist, Marshall recounts:

You [Tschugguel ] worked out your plan with your friend and I wired you some money for airfare, and you guys flew from Vienna over to Rome, and you got it done. A wonderful thing!

This part of the story includes a little zinger presumably intended to excite the wallets of TM’s starry-eyed groupies; the underlying hint is clear: Do you people have any idea how much round trip airfare from Vienna to Rome costs? Well, multiply it by two! As you can imagine, it set me back a pretty penny!

No doubt, given that we live in a day and age when the expectation of integrity has no place in our cult of personality society, even among otherwise sober-minded Catholics, I have little doubt that many of Marshall’s adoring fans will defend his blatant dishonesty.

Even so, it seems plain enough to me that from day one, this entire thing has been a set-up and, ultimately, one big marketing effort.

If you’re not sufficiently disturbed already, go back and watch Taylor Marshal “break” the Pachamama in the Tiber story in the wee hours of Oct 21, 2019. What you’ll see is a man who is well at ease with deception.

“I salute these men as heroes… pray for these, these heroes. We salute them,” he says.

In hindsight, it now seems rather plain that Marshall considers himself one of the story’s heroes. At several points in the 22-minute video, Marshall emphasizes that it’s very early in the morning in the States; i.e., he literally had to crawl out of bed to break the big news:

The marketing message here is equally as clear: Don’t forget, you heard it here first! Look at how singularly connected I am to events unfolding in Rome! See how hard I work for you, Mr. and Mrs. Donor, even going so far as to disrupt my slumber so you can stay informed?

There are, I suppose, plenty of Mr. and Mrs. Donors out there who are so desperate for a hero with “inside info” that they will continue to reward Taylor Marshall, in spite of the now indisputable fact that he evidently takes them for fools.

Speaking of the irrational need that some persons have for a hero, let’s talk about Trad, Inc.’s newest celebrity, Alexander Tschugguel, shall we.

As reported by LifeSite News:

“Regarding his own miserable weeks with coronavirus, Tschugguel revealed that after serious prayer and reflection and reception of the sacraments from a brave Catholic priest, he discerned why in particular he had been chosen to suffer. However, he also explained that he is yet not ready to reveal the reason.”

Evidently, Tschugguel has learned well at the knee of the marketing guru, Marshall, laboring to create a sense of anticipation among the mindless masses, faithful followers whom he hopes will be eagerly awaiting the great day of revealing when the prophet Alexander will at long last let the world know why he in particular, among all of the laborers in the vineyard of the Lord, had been chosen to suffer!

You can’t make this kind of melodramatic narcissism up!

As mentioned, it seems that Marshall and Tschugguel are cut from the same cloth, and a narcissistic cloth it is indeed.

The photo below (and also at the top of this post) is the screen shot that Taylor Marshall chose for a video that he made and posted on YouTube of Tschugguel giving a speech in Texas back in November.

Get this… the first thing that Taylor Marshall writes (annoyingly referring to himself in the third person) in the video’s description is the following:

Yes, because God forbid anyone might get the wrong impression and mistakenly conclude that Taylor Marshall is short!

Well, now we know; the man is exceedingly short, on integrity, that is, and either it matters in the world of Catholic media, or it doesn’t.

The mind of a modernist