Home
Blog Post
Remember this Day in History: Even if it makes no sense 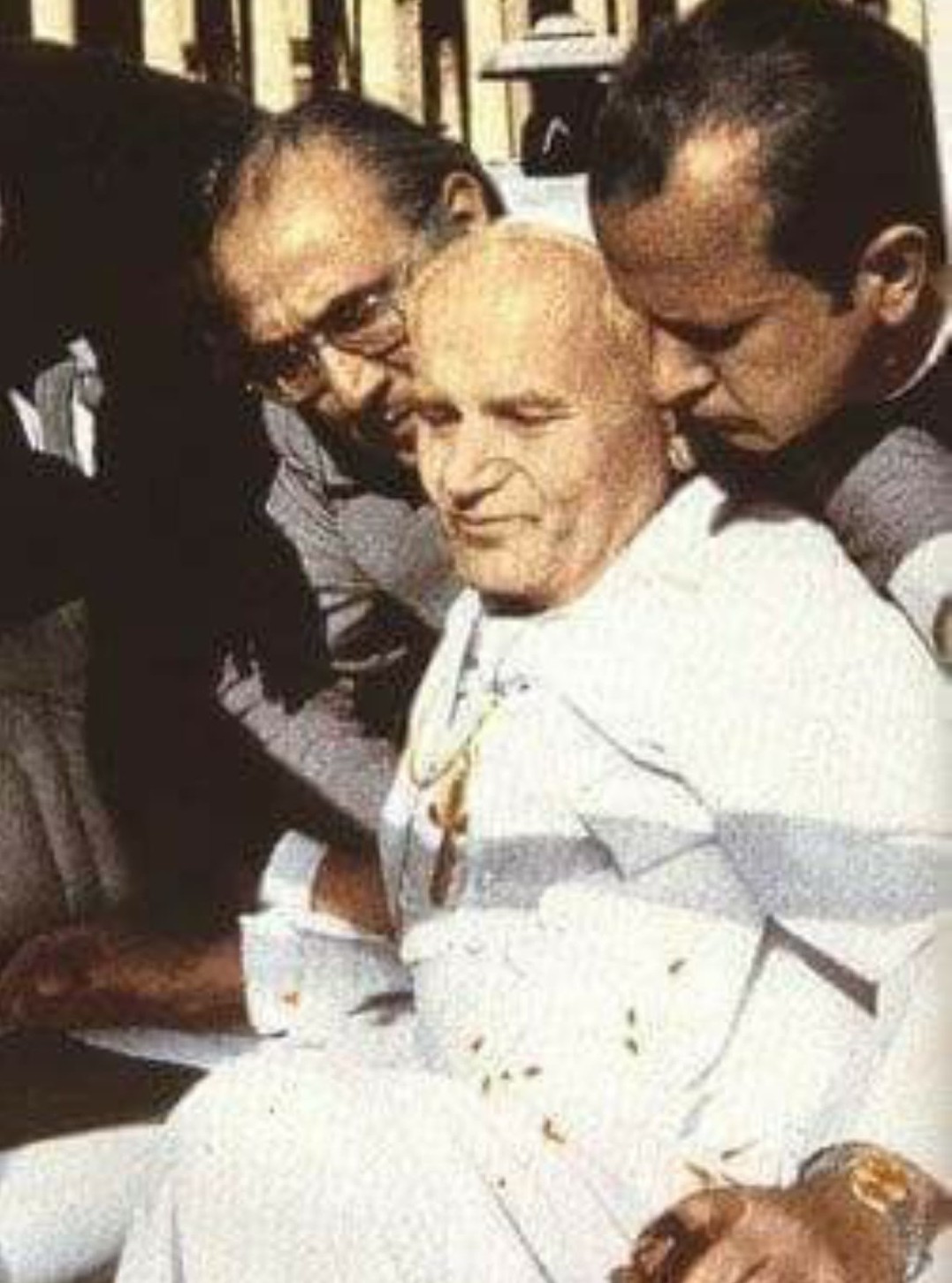 Who among us could ever forget the significance of today’s date? For it was on this day in 1981 that Pope John Paul II passed through Rome, which at the time was a city half in ruins.

As he made his way through the city, the Holy Father was accompanied by bishops, priests, and men and women religious. Trembling and proceeding with halting step, afflicted with pain and sorrow, the Holy Father prayed for the souls of the corpses he met along the way. That’s right, dead people!

Together, the pope and his entourage made their way up a steep mountain at the top of which was a big Cross that had been rough-hewn from the trunk of a cork-tree. Beneath the two arms of the Cross were two Angels, each of which had a crystal aspersorium in which they gathered up the blood of the Martyrs which they sprinkled upon the souls that were making their way to God.

It was such an unforgettable sight that those of a certain age will forever recall where they were when these events unfolded, even more so given what was about to take place.

Having reached the top of the mountain, the Polish Pontiff knelt at the foot of the big Cross, and then it happened, the fateful moment long ago prophesied by Our Lady of Fatima…

It was there, as he knelt on a mountain at the foot of the big Cross, that a group of soldiers opened fire on the weary pope letting loose a hail of bullets and arrows. Everyone who witnessed the event was certain he had been killed.

But alas, Heaven had other plans as the maternal hand of the Blessed Virgin Mary intervened, guiding the bullets and arrows in such way that, although gravely wounded, the pope halted at the threshold of death!

As readers are most certainly aware, the fanciful tale above is an adaptation of the vision attached to the Third Secret of Fatima; credit for this fictional version goes to Josef Ratzinger, Angelo Sodano, and Karol Wojtyla himself – the trio of shameless deceivers who conspired to convince God’s people that said Secret not only had been fully published in the year 2000, but was fulfilled on May 13, 1981.

If this were true, then the events that actually took place on that day would have looked a lot like the make-believe scene described above, but as even the most devoted JPII and BVXI groupie must admit, it was not even close.

Evidently, the three aforementioned scoundrels considered it a matter most trivial to mock the Mother of Jesus Christ, apparently having convinced themselves that doing so served the greater good of furthering the humanist aims of the Second Vatican Council.

So, what really happened on this date forty years ago?

The following two-and-a-half-minute video produced by Rome Reports, a news agency on friendly terms with the conciliar church, provides a recap. Please, take a look; refresh your memory.

As mentioned, Wojtyla claimed that Our Lady had directly intervened that day in order to keep him alive. No one can say for certain whether or not this is true, but let’s, for the moment, assume that she did. Why, one naturally wonders, knowing what we know now, would she do such a thing?

Surely it wasn’t to enable him to live long enough to orchestrate the Assisi abominations, to take part in pagan rituals, to reverence the Qur’an, etc., and other acts that amounted to a frontal assault against the Kingship of her Son.

So, why would Our Lady wish to keep him alive?

It occurs to me that maybe she intervened that day in order to make it obvious that the Vatican’s claim that he was the pope described in the Third Secret vision was a blatant lie. Had he actually died; many more people would have been deceived into believing it.

At this, I call your attention back to the Rome Reports video: Do you recall what the narrator said beginning at the 14 second mark?

After a moment of confusion, John Paul II collapses. His white cassock is stained with blood. A bullet hit him directly in the abdomen.

Now, go back and take a look at the video once again. Examine it frame by frame if you must. Do you see all that blood on his bright white papal cassock?

In fact, even after a Google image search of the many, now iconic, images of the assassination attempt, I couldn’t find even one that matches the narrative. The closest I could find is the image at the top of this post showing JPII with what looks like a wounded finger, with some small dots of blood on his cassock. I could find nothing resembling a white cassock stained with blood, the result of being shot directly in the abdomen.

In any case, the cassock is now on display in Poland. Below is a video showing what it looks like today:

Notice the large blood stain on the right side beginning at the knee, moving down and back to the area of the calf. There also appears to be staining on the left side, behind the knee. This is rather strange given reports that one bullet grazed his finger, another struck him in the arm, and yet another resulted in a direct hit to the abdomen.

I certainly don’t know how to explain it, but at this point we all know this much:

Karol Wojtyla, who was well known as a young man for his theatrical performances back in Poland, conspired with Ratzinger and Sodano to concoct a magnificent lie surrounding the Third Secret of Fatima, and that lie incorporated the events of May 13, 1981.

Make of this what you will.