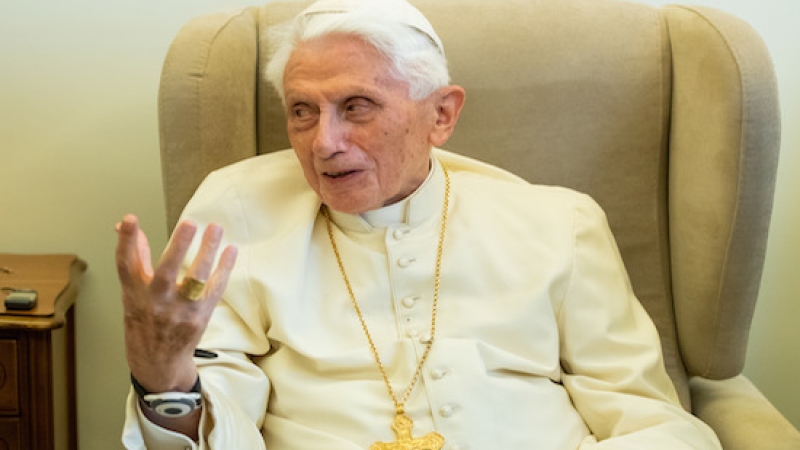 This morning, the Italian newspaper Corriere della Sera published an article, which, according to its headline, is an “Interview with Ratzinger.”

In this day and age of rampant fakery, it has never been more obvious that “news” items are more often scripted and orchestrated than merely “reported.” The article under review here is no different, the key to its reading intimated in its penultimate paragraph:

As always when it comes to the Vatican, reality and symbolism are linked in an indissoluble way.

It is a curious, albeit rather common, occurrence; how often evildoers – in this case, the purveyors of propaganda – seem unable to resist the urge to tip their hand! It is almost as if they are bragging, congratulating themselves on their cleverness, with a wink and a nod directed toward their knowing confreres.

In any case, one can be grateful that writer Massimo Franco saw fit to let readers know, those with eyes to see anyway, that all is not what it seems.

“There are not two popes. The Pope is only one…,” Joseph Ratzinger says in a faint voice, striving to articulate every word well. [Emphasis in original]

In this opening sentence, the primary purpose of the article is revealed, the bolded text but a smokescreen, a matter of mere secondary concern at best. Evidently, the majority of media, Catholic and otherwise, has taken the bait.

Even so, the real point is plain: Ratzinger’s death is quickly approaching; it is imminent, and the Roman authorities – for selfish reasons, no doubt – wish to prepare the sheep.

One notes that the roughly 1,500-word article is overwhelmingly comprised of Franco’s observations, no doubt with the pre-approval of the Vatican Press Office. It contains scarcely more than 250 words attributed to the “interviewee.” Some interview, eh?

Would anyone be surprised to discover that there really was no interview at all? (One also notes the curious absence of any photographs of the encounter.) In any case, one can be absolutely certain that the only messages being conveyed in this article are those that suit Bergoglio’s Vatican and the agenda of their globalist taskmasters.

Franco goes on to write:

Meeting Benedict is rare, especially in recent times.  And even more unusual is the fact that he agreed to confront one of the most traumatic topics for the life of the Catholic Church in recent centuries. His clarification on the uniqueness of the Papacy is obvious to him but not for some sectors of conservative Catholicism more irreducible in hostility to Francis. For this reason, he reiterates that “the Pope is only one”, weakly tapping the palm of his hand on the armrest: as if he wanted to give the words the strength of a definitive affirmation. [Emphasis in original]

Here, at least some of the bolded text is genuinely germane to the article’s principal objective; Benedict is so weak that he only muster a “tap” to emphasize a crucial point.

Further along in the article, Franco hammers the central point home unambiguously:

The sentences come out with a dropper, the voice is a breath, it comes and goes. And Monsignor Gaenswein in some rare passages repeats and “translates”, while Benedict nods in approval. The mind remains clear, quick as the eyes, alert and lively. The white hair is slightly long, under the papal skullcap as white as the robe. Two very thin wrists emerge from the sleeves that underline an image of great physical fragility. Ratzinger wears a watch on his left wrist and on his right a strange contraption that looks like another watch but is actually an alarm ready to go off if something happens to him.

Benedict’s voice is so weak it has been reduced to all but air, so inaudible at times that his ever-present handler needs to decipher his intentions. The Panzerkardinal’s body is wasting away to the point where, evidently, just sitting for a proper haircut presents too much of a strain.

He wears a medical alert bracelet, “ready to go off if something happens to him.”

Yes, something is going to happen to him, and we are being led to believe that it will be soon, perhaps even at any moment.

Will it be natural death, or will it be an event orchestrated for maximum public relations value, like perhaps a Good Friday passing, or maybe on the heels of a blessed encounter with the “God of Surprises” who lives next door?

Remember, this is the same Vatican that audaciously scripted wholesale lies and calumnies, while thumbing its collective nose at the Blessed Virgin Mary, in order to bury the truth about the Third Secret of Fatima. Ratzinger himself played a pivotal role in that magnificent act of deception.

Only the naïve would think these people incapable of taking deliberate steps to usher Benedict into the afterlife at a time, and under circumstances, of their own choosing.

At this, let’s turn our attention to the other messages, also noteworthy, being conveyed in the article, beginning with another death that is destined to happen sooner rather than later, in this case, that of an 84-year-old Argentinian.

And when the Pope Emeritus is asked about Francis’ next visit to Iraq, the expression becomes serious, worried.

“I think it’s a very important journey,” he notes. “Unfortunately, it falls at a very difficult moment that also makes it a dangerous trip: for security reasons and for Covid. And then there is the unstable Iraqi situation. I will accompany Francis with my prayer.” [Emphasis in original]

One notes that the “dangerous” aspects of Bergoglio’s trip are presented as two-fold, for one, due to COVID, for another, in light of threats to his physical safety. The latter alone, however, was reiterated: for security reasons… the unstable Iraqi situation.

Are self-identified Catholics, and the world at large, being prepared for the martyrdom of Jorge Bergoglio?

How better to put an exclamation point on the “humble” narrative, expediting his canonization and greasing the skids for his successor – who may have already been anointed by the globalist elite – to carry on in his footsteps in service to the United Nations and Agenda 2030? At this point, nothing would shock me.

As for the COVIDS, an operation of these same elite, Franco’s article states:

Ratzinger has already been vaccinated, he received the first dose and then he was given the second, like Monsignor Gaenswein and most of the inhabitants of the Vatican City. In this respect, the small state is observed with a touch of envy in Italy and in much of Europe, where vaccines arrive slowly. The virus is frightening, and Benedict mentions the dramatic experience lived by the president of the CEI, Cardinal Gualtiero Bassetti, who was healed after a long battle. “I just saw him again and he told me he is much better now. I found him well.” [Emphasis in original]

The message is clear: The COVIDS, in spite of its over 99% survival rate, is really scary stuff, and you should consider yourself damned lucky if you can get the vaccine, never mind all of that embryonic stem cell talk and the fact that it doesn’t really vaccinate anyone against getting it or giving it.

If any doubt still remains as to what team these people are playing on, Franco writes:

One naturally thinks of the United States, and to observe that now, with Joe Biden in the White House replacing Donald Trump, relations with the Vatican are destined to improve.

On Biden, the second Catholic president after John Fitzgerald Kennedy, Ratzinger expresses some reservations on a religious level. “It’s true, he’s Catholic and observant. And, personally, he is against abortion,” he observes. “But as president, he tends to present himself in continuity with the line of the Democratic Party … And on gender politics we have not yet fully understood what his position is”, he whispers, giving voice to the mistrust and hostility of a large part of the US episcopate towards Biden and his party, considered too liberal. [Emphasis in original]

Make no mistake, relations between the U.S. and Modernist Rome are vastly improved now that both are under the headship of globalist tools merely posing as Catholic.

It’s true, he’s Catholic and observant. And, personally, he is against abortion.

Get it? The diabolical political position made famous by Mario Cuomo now has Benedict’s imprimatur; at least the Vatican wants you to believe that it does.

The Bergoglian machine also wants you to believe that Biden’s position on gender politics is not yet fully understood. These guys are a riot!

Franco reports that Benedict, whose mind remains clear, receives four daily newspapers, two Italian, and two German. And yet, we’re supposed to imagine that he hasn’t taken note of the crossdressing degenerate, Dr. Dick (alias, Rachel) Levine, that Biden picked for Assistant Secretary of Health? Hasn’t he heard about the Executive Order Biden signed forcing schools to allow boys with pigtails and pedicures to play sports on the girls’ team?

You can’t make this stuff up!

Evidently, the Vatican is keen to prop up the U.S. bishops as well, pretending as if there is mistrust and hostility on a large part of the US episcopate towards Biden and his party because it is considered too liberal.

Please, the USCCB is an arm of the Democrat Party and has been for decades.

In conclusion, while other media outlets are mainly focused on Benedict’s comments [supposed] concerning his departure, as if that’s the big story, don’t you believe it.

The main purpose of this latest “interview” is, first and foremost, to signal that Josef Ratzinger is going to die. Soon. Bergoglio’s Vatican may even know the exact date and time, and they are Hell bent on leveraging whatever sway Benedict still has over public opinion, for all its worth, before it’s too late.

Judging the matter of Christian unity