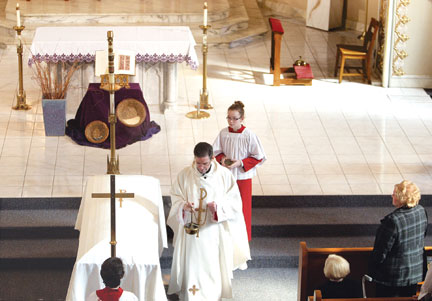 Make no mistake about it: The Church in our day is in the midst of a terrible, and in many ways unprecedented, crisis of faith. This objective reality, however, is largely lost on the overwhelming majority of Catholics, both clerical and otherwise.

While some Catholics, with deliberate intent, actively promote the various agendas that underlie the situation, others simply choose to downplay the magnitude of the crisis out of sheer weakness, as acknowledging the problem suggests a certain responsibility for contributing to the solution.

The majority, however, simply don’t know any better after having been lulled into accepting as “Catholic” the rather comfortable, undemanding, and protestantized spirituality that has been served up in so many parishes over the last several decades.

It is with this latter group in mind that I would suggest that all one needs to do in order to remove all doubt as to the extent of the current crisis is to attend, with eyes opened wide, just about any Novus Ordo Mass of Christian Burial.

While I have been to many such funeral Masses over the years, I can honestly say that I haven’t experienced even one, single, solitary liturgy of this sort that is truly reflective of Catholic doctrine regarding last things, much less the very purpose of said liturgy.

Part of the problem stems from the fact that so many of our priests, and even bishops, seem incapable of resisting the urge to twist the meaning of the funeral Mass into a “celebration of the life” of the deceased that effectively serves as a quasi-canonization, particularly in the minds of those most deeply in mourning, who by tragic coincidence also just happen to be the very people upon whom the dearly departed should be able to rely for prayers of intercession going forward.

As widespread as this situation is, I am more concerned with the problems that are inherent in the actual rite itself.

Take, for instance, the text of the “Final Commendation and Farewell,” beginning with the “Invitation to Prayer” of which there are two options (a hallmark of the post-conciliar liturgy, options, options, options… but more on that later):

“Before we go our separate ways, let us take leave of our brother/sister. May our farewell express our affection for him/her; may it ease our sadness and strengthen our hope. One day we shall joyfully greet him/her again when the love of Christ, which conquers all things, destroys even death itself.” (Option 1)

So, can we really be assured that we will one day “joyfully greet” our deceased loved ones once again? Maybe we will, but then again, maybe we won’t.

Sure, those in mourning may experience a fleeting moment of comfort thanks to such reassurance, but it’s based less on the truth than on mere sentimentalism, and besides, providing comfort to mourners isn’t the primary purpose of the funeral Mass in the first place.

The bottom line is this: it is an undeniable disservice to the deceased to downplay the need to pray, and to offer sacrifice, for the repose of their souls.

Furthermore, this prayer seems to suggest that we await some future event wherein the love of Christ will “one day” destroy “even death itself,” an apparent convolution of those Catholic doctrines that concern the general resurrection, the efficacy of the Our Lord’s saving act, and the work of redemption that continues in the life of the Church Militant.

Apart from sound catechesis, the likes of which would be inappropriately given in the liturgy, pastors using this text invite confusion, especially when one considers the Second Epistle of St. Paul to Timothy:

Our Saviour Jesus Christ, who hath destroyed death and hath brought to light life and incorruption by the gospel (2 Tim 1:10).

Trusting in God, we have prayed together for (N.) and now we come to the last farewell. There is sadness in parting, but we take comfort in the hope that one day we shall see N. again and enjoy his/her friendship. Although this congregation will disperse in sorrow, the mercy of God will gather us together again in the joy of his kingdom. Therefore let us console one another in the faith of Jesus Christ.

Again, there is a false (and dare I say, highly protestantized) sense of confidence being expressed in the suggestion that God’s mercy is such that everyone, without distinction, can be assured of one day being gathered “in the joy of His kingdom.”

And yet we wring our hands wondering why so many reject the very notion of Hell!

Moving on, in the “Prayer of Commendation” (Option A) in the post-conciliar rite, we find (excerpt):

Into your hands, Father of mercies, we commend our brother/sister (N.) in the sure and certain hope that, together with all who have died in Christ, he/she will rise with him … help us who remain to comfort one another with assurances of faith, until we all meet in Christ and are with you and with our brother/sister for ever.

“Sure and certain hope” that “we all” will rise with Christ?

Well, OK… all of us shall rise in the general resurrection; some unto glory, others unto eternal damnation, but “assurances of faith” that we will meet again in Christ for all eternity? There’s no use in sugarcoating it; this simply is not a Catholic proposition.

And please, spare me any hair splitting analysis wherein the singular word “hope” allegedly makes this prayer a plausible representation of Catholic doctrine. It does not. In fact, there isn’t even a hint of a doctrine in these prayers that a Purgatory-rejecting protestant minister wouldn’t be comfortable proclaiming.

And that, my friends, is precisely the impetus behind these tepid and only marginally Catholic texts.

Looking to the General Instruction of the Roman Missal (GIRM) we find:

Moreover, pastors should take into special account those who are present at a liturgical celebration or who hear the Gospel on the occasion of the funeral and who may be non-Catholics or Catholics who never or hardly ever participate in the Eucharist or who seem even to have lost the faith. For Priests are ministers of Christ’s Gospel for all. (cf GIRM 385)

This portion of the GIRM is often used, not surprisingly, as an excuse for watering down the Faith, as if presuming to affirm the salvation of a non-Catholic’s deceased loved one is an act of mercy.

And what exactly does it mean to take nonbelievers “into special account” anyway? Does it mean emulating St. Peter who took special account of the circumcision party in the way he treated gentiles, an act for which St. Paul rightly rebuked him? (cf Gal 2:11-12)

What’s more, one wonders in what sense a Catholic priest “ministers” to non-Catholics apart from proclaiming the fullness of the Faith (i.e., everything whatsoever that Jesus commanded) with neither ambiguity nor attenuation, ultimately with an eye toward their conversion?

In sum, the Novus Ordo Mass of Christian Burial is destined to project a less-than-Catholic image regardless of the celebrant’s mindset; i.e., the best the priest can do is perhaps offset some of the extraordinary deficiencies in the rite with an extraordinarily strong homily, a difficult position in which a priest should never be put.

Indeed, I personally know of a priest who has taken it upon himself to do just this, and it has landed him in hot water not just with the loved ones of the deceased, but with his bishop as well.

By contrast, the traditional Requiem Mass of the Roman Rite is simply the Mass, albeit with certain minor alterations and propers that are fitted to the occasion. And guess what, none of them are designed to give non-Catholics that “feel right at home” level of comfort.

For brevity’s sake, following is just a sampling of those parts of the traditional rite that stand in sharp contrast to the “once saved, always saved” overtones woven throughout the text of the post-conciliar version:

“Absolve, O Lord, the souls of all the faithful departed from every bond of sin. And by the help of Thy grace, may they be enabled to escape the judgment of punishment.” (From the Gradual)

“Day of wrath, O day of mourning, Lo, the world in ashes burning – Seer and Sibyl gave the warning. O what fear man’s bosom rendeth, When from Heaven the Judge descendeth, On whose sentence all dependeth! … Guilty, now I pour my moaning, All my shame with anguish owning: Spare, O God, Thy suppliant groaning.” (From the Sequence; the thirteenth century hymn, Dies Irae)

“O Lord Jesus Christ, King of glory, deliver the souls of all the faithful departed from the pains of Hell and from the deep pit: deliver them from the mouth of the lion, that Hell may not swallow them up … Hear us, O Lord, we pray, and let the soul of Thy servant (N.) profit by this sacrifice, by the offering of which Thou didst grant that the sins of the whole world should be loosed.” (From the Offertory)

In light of all that is highlighted here, I have done my best to secure the assurances of my wife and close friends that, in the event they survive me, they will make every attempt to arrange a Traditional Requiem Mass on my behalf, and I would suggest that all would do well to do the same.

At the very least, it may be a good idea to include in one’s final will and testament the following request:

If during the course of my funeral Mass, the priest dares to give those who are mourning my passing even the slightest impression that I am enjoying the Beatific vision in Heaven at that very moment, please give him the following message from me:

Get behind me Satan!