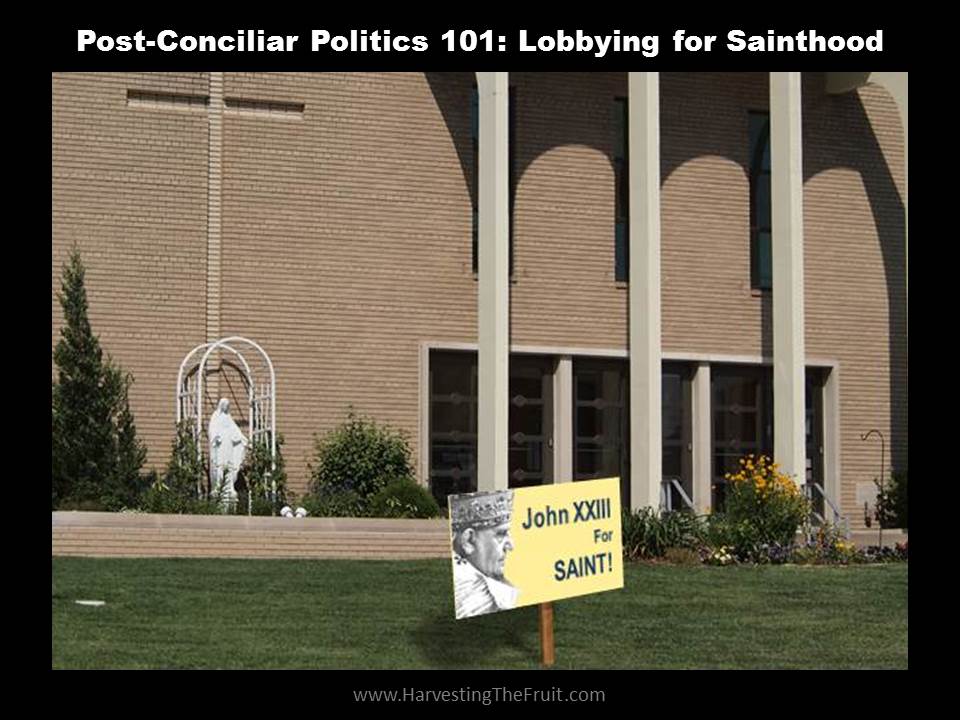 Following the “New Pentecost” otherwise known as Vatican Council II, the Latin Church received a “New Order of Mass,” which naturally gave rise to a “New Evangelization” that is ostensibly ordered toward the dawn of a “New Springtime.”

We have new church architecture, new “lay ministers,” new vestments, new disciplines, new Dicasteries, a new Code of Canon Law, a new Catechism and even a new set of mysteries for the Most Holy Rosary!

With this being the case, one can hardly be surprised to discover that a novel approach to the process of canonization has also arrived on the post-conciliar scene.

No, I’m not talking about the Santo Subito fast track upon which Pope John Paul II is traveling, nor the dispensing with verifiable miracles as in the case Pope John XXIII, or even the abolishment of the Devil’s Advocate at the hands of the former.

I am referring to the new underlying force that currently drives papal causes; namely, the desire to hold up for veneration, not so much an individual whose life serves as an example of heroic virtue, but rather the new ideology that came to define their life’s work.

Setting aside for the present discussion the relative merits of Popes John XXIII and John Paul II, whose canonizations are scheduled to take place on April 27th, let’s take a brief look at the causes of the last six popes predating the Council.

Declared “Venerable” on December 9, 2009 by Pope Benedict XVI, the cause of Pope Pius XII is unlikely to move forward any time soon for fear of upsetting the Jews and various other progressive enemies of the Church, both within and without.

In spite of any accomplishments of which his pontificate may boast, Pope Pius XI needn’t worry about being canonized anytime soon thanks to the Encyclicals, Mortalium Animos, which pulls the carpet out from under the post-conciliar approach to ecumenism, and Quas Primas, which teaches the unadulterated (even if inconvenient for moderns) doctrine concerning the Kingship of Jesus Christ.

The reign of Pope Benedict XV was bookended by the lengthier and better known pontificates of Pope St. Pius X and Pope Pius XI, rendering him the 20th century’s forgotten pope. Much of his pontificate was consumed with diplomatic and humanitarian efforts relative to World War I, but he is perhaps best known for having promulgated the 1917 Code of Canon Law.

When Pius XI ascended the papal throne and caught his first glimpse of the ledger of the Holy See, he was alarmed at what he saw. In fact, Cardinal Gasparri had to borrow money to pay for Benedict’s funeral and the conclave. The expenditures were clearly recorded. Benedict had spent nothing on himself. He made only the most necessary repairs in the Vatican. He had depleted the treasury in charitable contributions during the war and after. He had asked the world to contribute heroically but he himself always took the initiative in this charity. (“The Life of Benedict XV,” pp. 180-181)

Even so, his cause appears to be nonexistent. One wonders to what extent this is due, in part, to the widely accepted understanding that it was Pope Benedict’s urgent appeal to the Blessed Virgin Mary in 1917 that led to her appearance at Fatima, a topic the current regime evidently considers far too hot to handle. (One may recall Pope Francis’ “consecration” that wasn’t.)

Though much could be said of his pontificate, I will limit myself here to but one observation:

Had Pope Pius XII not canonized the former Giuseppe Sarto prior to the advent of the conciliar revolution, I have no doubt whatsoever that his cause would have sunk under the weight of the Syllabus of Errors, Pascendi Dominici Gregis and the Oath Against Modernism.

Pope Leo XIII may represent something of a dilemma, albeit a minor one, for the Captains of the New Evangelization in that on the one hand, his seminal articulation of Catholic social doctrine, Rerum Novarum, is an Encyclical with which the pioneers of the modern day social justice movement would like to lay claim as a source of continuity.

On the other hand, their contempt for the very clear teaching found in such encyclicals as Libertas (regarding human liberty), Diuturnum (on the origin of civil authority) and Immortale Dei (on the matter of Church-State relations) make Pope Leo XIII a persona non grata whose cause is unlikely to see the light of day any time soon.

Last but not least is Pope Pius IX, the only entry on our list of pre-conciliar popes whose cause has since progressed to the point of beatification, an event that took place on 3 September 2000, the same day as the beatification of Pope John XXIII.

While one might be tempted to think that the example of Pope John Paul II raising Pope Pius IX to the altars undermines the present thesis; it actually manages to provide the exact opposite.

Turning our attention once again to Pope Pius XII, while it is reasonable to believe that his cause will remain stalled for the foreseeable future, one of two things could potentially move it forward:

For one, this or a future pope could decide to give an appropriate amount of consideration to Jewish sensibilities relative to the matter (in other words, none). For another, the Captains of the New Evangelization might come to the conclusion that his beatification and/or canonization is expedient in service to their own cause regardless of the backlash it will necessarily invite.

Though the latter scenario is perhaps even more difficult to envision than the former, I would argue that this is precisely what led to the beatification of Pope Pius IX, a Pontiff whose memory also serves as a lightning rod for Jewish consternation.

Where on earth did I get that idea, you may wonder?

From one of the new ideology’s most celebrated promoters, Georgetown theology professor Fr. John W. O’Malley.

While there was no shortage of indignance expressed over the beatification of Pius IX, Fr. O’Malley’s rant in America Magazine is particularly useful in exposing the forces that are currently brought to bear upon the canonization process.

This, my friends, is more than just the irrelevant ramblings of a disgruntled liberal; it is truly nothing less than a slice of “inside baseball.”

You see, for Fr. O’Malley, a product of the new ideology in the extreme, the process of a given pope’s cause for canonization is essentially “political” in nature, and so it necessarily concerns matters that are open to the influence of partisan lobbyists.

Canonizations, in other words, are now viewed as useful tools for promoting, or defeating, a given agenda.

Call me a cynic, but I suspect that the decision to beatify both Pius IX and John XXIII on the very same day was made as part of a calculated effort to create the illusion of continuity between the Church as the former knew it, and the skeleton that emerged after the latter “opened the windows” and let the modernists in.

Now here we are less than three months away from the scheduled canonizations of John XXIII and John Paul II (if the Lord should deign to allow it), and while I hesitate to add to the understandable angst the very prospect is causing traditional Catholics, the bad news is that the lovers of novelty intend this to serve as a prelude to the church-of-man’s coming out party; the canonization of Paul VI.