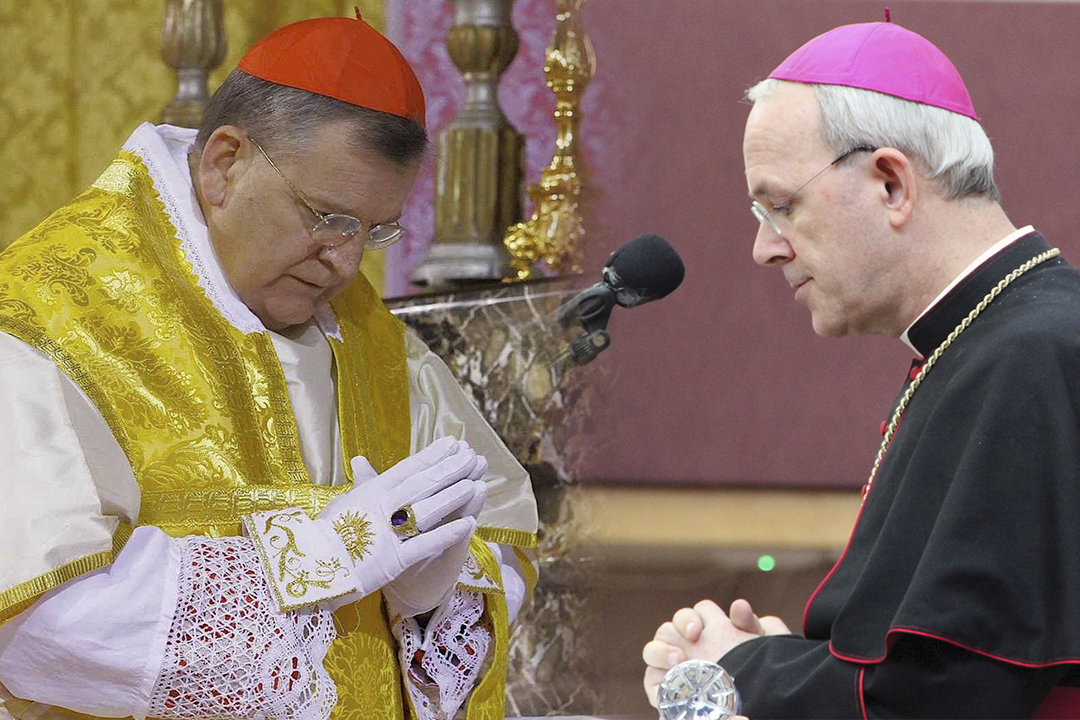 A group of conciliar churchmen have just published a text – similar in many respects to the Manifesto issued by Cardinal Muller back in February – with the intention of asserting Catholic truths in light of so many Bergoglian errors and outright heresies.

The nearly four-thousand word text entitled, Declaration of the truths relating to some of the most common errors in the life of the Church of our time, is cosigned by Cardinals Raymond Burke and Janis Pujats, Archbishops Tomash Peta and Jan Pawel Lenga, and Bishop Athanasius Schneider.

The text does indeed contain many truths. It is severely lacking, however, inasmuch as it names neither the primary enemies of said truths (the Second Vatican Council and its unwavering devotees – the heretic Jorge Bergoglio chief among them), nor does it dare to utter the word “heresy.”

Furthermore, it fails to explicitly identify, much less condemn, the specific erroneous propositions it intends to correct. For example, of the forty individual statements that make up the Declaration, more than half-a-dozen are aimed directly at the errors contained in AmorisLaetitia, and yet the authors of the text have not the spine to say so. In a similar way, the vast majority of the remaining statements are clearly meant to correct other Bergoglian heresies (e.g., regarding capital punishment), but the offending errors are never specifically mentioned with attribution to their humble author.

In an “Explanatory Note” accompanying the Declaration, the signatories approvingly cite Vatican Council II in the very first paragraph (as well as throughout the Declaration itself); as if it somehow provides a sure guide in these tempestuous times. Clearly these churchmen haven’t the wherewithal to identity the Council for what it truly is – the charter that guaranteed the very crisis they propose to address.

In addition to the Second Vatican Council, the Declaration cites traditional councils like Trent and the Fifth Lateran, but don’t be fooled. It also relies very heavily on the “wisdom” of such dubious sources as Paul VI, John Paul II, the so-called Catechism of the Catholic [sic] Church, the Credo of the People of God, and the 1983 Code of Canon Law.

Unlike the now well-known Open Letter that was signed by some nineteen theologians, the Declaration doesn’t call for anything that can be considered a remedial course of action aimed at defending the Church and her faithful from the Bergoglian wolf.

Since Pope Francis has manifested heresy by his actions as well as by his words, any abjuration must involve repudiating and reversing these actions … If – which God forbid! – Pope Francis does not bear the fruit of true repentance in response to these admonitions, we request that you carry out your duty of office to declare that he has committed the canonical delict of heresy and that he must suffer the canonical consequences of this crime.

As for the Heretic-in-Chief, the authors of the Declaration by contrast, in addition to failing to name him, could only manage to muster up the gumption to offer:

A common voice of the Shepherds and the faithful through a precise declaration of the truths will be without any doubt an efficient means of a fraternal and filial aid for the Supreme Pontiff in the current extraordinary situation of a general doctrinal confusion and disorientation in the life of the Church. (See the “Explanatory Note”)

Of course, it goes without say that a feckless effort such as this would be incomplete without an accompanying petition that allows other conservative wannabe do-gooders to add their own name to the mix, which LifeSite News wasted no time in creating.

Look, I am pleased to presume goodwill on the part of the signatories; men who have at least the modicum of Catholic sense necessary to realize that something is dreadfully wrong, and in an unprecedented way. Even so, it must be said that these churchmen have evidently chosen to largely disconnect their collective intellect from the plain reality that has been staring all of us in the face for more than six years:

Jorge Bergoglio has long known damned well what the Church infallibly teaches with respect to the doctrines outlined in the Declaration. He is determined nonetheless to press forward with a contrary agenda – a false religion – which is nothing more and nothing less than the conciliar agenda, albeit on steroids.

As such, let’s be clear: This latest Declaration in no way provides “filial aid” to “Francis” (as he is known) or anyone else for that matter. In fact, given its reliance on the anti-Catholic sources mentioned above, as if they can provide the full light of truth, it represents nothing more than a danger to souls; one adorned in a traditional disguise that will only serve to further deceive the innocent.

Bottom line: The only declaration that is necessary at this point relative to the imposter Francis is one that makes it known to all of the faithful that Jorge Mario Bergoglio has of his own volition severed himself from the Body of Christ and, as such, he can no longer be considered a member of said Body, much less does he have any credible claim to being its visible head on earth, the Vicar of Christ. PERIOD.

Building an infrastructure of evil

Tales from the Humanae Vitae Diaries – No. 1