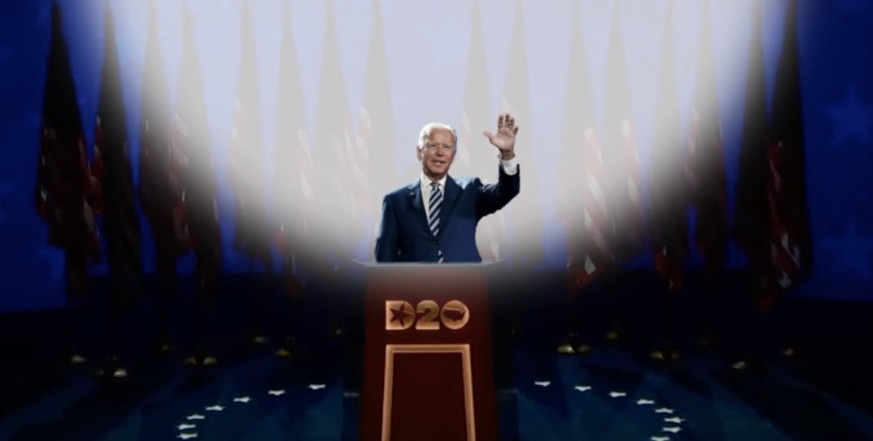 For years, pundits and political analysts have accused Democrats of having a “God problem,” insisting the party does not do enough to highlight the role religion plays in the lives of millions of Americans.

The accuracy of the critique remains a matter of dispute, but few, if any, politicos made that claim Thursday night (Aug. 20) as former Vice President Joe Biden closed out this year’s atypical — and atypically religious — Democratic National Convention.

The more observant, however, will have noticed that Biden’s address, in sum, was a sort of a spiritual declaration, and not atypically so, but rather was it a religious manifesto delivered in precisely the manner that one might expect of the godless left.

The theme, woven throughout the entirety of the speech, was a simple one – light vs. darkness. Biden began:

Ella Baker, a giant of the civil rights movement, left us with this wisdom: Give people light and they will find a way.

The current president has cloaked America in darkness for much too long. Too much anger. Too much fear. Too much division.

With this, the premise was made plain: Ours is a land that has fallen into a crisis of spirit. We are a people who have lost their way, engaged in what Biden later called “a battle for the soul of this nation.”

Who among the Christian faithful, and even certain religious-minded Jews, could possibly fail to recognize the Biblical motif being established in this opening pronouncement?

And they shall look to the earth, and behold trouble and darkness, weakness and distress… (Isa 8:22)

But he that hateth his brother, is in darkness, and walketh in darkness… (1 John 2:11)

The problem having been defined – darkness in the absence of light – Biden didn’t make his audience wait long for the solution:

Here and now, I give you my word…

As if the blasphemous Messianic overtones were not as yet entirely obvious, Biden set forth the terms of his covenant with the people:

If you entrust me with the presidency … I will be an ally of the light not of the darkness.

Light is more powerful than dark.

The people that walked in darkness, have seen a great light: to them that dwelt in the region of the shadow of death, light is risen. (Isa 9:2)

And the light shineth in darkness, and the darkness did not overcome it. (John 1:5)

Biden went on to brazenly inject the language of redemption into his speech:

We can choose … to be reborn, to unite. A path of hope and light.

This is a life-changing election … a moment that calls for hope and light and love.

For Christians, the subtle sacrilegiosity of Biden’s words is unmistakable, especially having been delivered by a man who calls himself Catholic, a lie that only the genuinely ignorant or willfully deceived embrace. Authentic believers know very well that it is Jesus Christ – not the Democrat Party and its candidate – who is the true Light of the world, and it is only by dying with Him and rising with Him in the waters of Baptism that one is reborn, imbued with the theological virtues of faith, hope and love.

The Democrat Party’s notion of “light” has long been well known and is nothing short of diabolical. For instance:

– Abortion-on-demand, the wanton dismemberment of a perfectly innocent human being, is called “healthcare.”

– The diversity of classes, and even the diversity of genders, each of which has been imparted to humankind by Almighty God Himself, is called “injustice.”

Woe to you that call evil good, and good evil: that put darkness for light, and light for darkness… (Isa 5:20)

Now, this is not to say that the Republican Party is nothing but radiant, utterly devoid of greedy politicians, wicked supporters and harmful policies. It is not.

That said, it bears mention that evil can be defined as the lack of a due good. As for its presence in society, one might think of a gas gauge, with “FULL” being pure goodness – something human society will never attain in this life, and “EMPTY” signifying pure evil – such as in Hell where the grace of God is not to be found in any measure.

In his treatise on the topic of kingship and political life, St. Thomas Aquinas hinted at this reality when he wrote, “We ought to avoid that alternative from which great danger is more likely to follow.” (De Regno, Ch. 6)

Here in the United States, we will soon be faced with making a choice between two Presidential candidates. Though neither is entirely absent of danger, it’s a choice that most certainly will move the needle in one direction or another, and in predictable ways.

This is nothing new. Politics has always been about far more than just left vs. right, liberal vs. conservative, Democrat vs. Republican. Underneath it all, just below the surface of the wrangling over policy positions, legislative initiatives and social programs, has been the age-old struggle between good and evil, between God and the Adversary.

In recent years, however, something has changed.

Over the past several months in particular, political maneuvering has become so transparently deceitful, so blatantly cruel and destructive that the once underlying spiritual reality is now on the surface, utterly tangible and fully exposed for all to see.

American citizens are as clearly divided today as ever. There are, and ever have been, just two camps, and I am not referring to Republican and Democrat.

Rather, there are those who sincerely wish to build the City of God in cooperation with the Creator, and those who labor to construct the City of Man in service to Satan.

If there was ever any question as to where the preponderance of the Democrat Party faithful and their candidate stand heading into the final day of the National Convention, Joe Biden removed all doubt as he delivered a spiritual manifesto whereby he boldly presented himself to our darkened nation as the light bearer.

As a tradition-minded Catholic (if you’ll pardon the redundancy), I am struck by the hint of truth in Biden’s claim.

The Latin name for the “Light Bearer” is Lucifer.