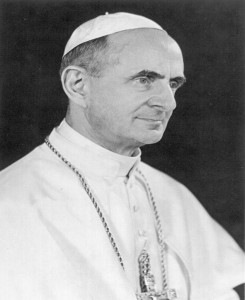 It’s not uncommon for faithful Catholics to point to the Encyclical, Humanae Vitae, as the “crowning glory” of the pontificate of Pope Paul VI, applauding it as an example of his faithfulness, and even his heroic virtue. Trouble is, they have it exactly backwards.

There are three modes, or organs, of infallibility; ex cathedra statements given by the pope, de fide teachings issued by an ecumenical council, and the universal ordinary magisterium of the Church. This latter mode refers to those doctrines that have been taught constantly and definitively over a period of many centuries by the bishops of the world, in union with the Roman pontiffs.

As an example of the latter, consider:

When a Dubium was sent to the Congregation for the Doctrine of the Faith in 1994, asking whether or not the teaching given by Pope John Paul II in the Apostolic Letter, Ordinatio Sacerdotalis, concerning the restriction of the priesthood to males only, is infallible, Cardinal Ratzinger replied in the affirmative by virtue of the universal ordinary magisterium of the Church.

According to numerous theologians, not the least of whom is the eminent moral theologian Dr. Germain Grisez, who also happens to have been a member of the commission appointed by Pope Paul VI to study the question of contraception, the doctrine at hand had long since belonged that very same category.

This being the case, in giving Humanae Vitae, Pope Paul VI was simply reiterating an infallible teaching that had ever been moored to Tradition as evidenced by the universal ordinary magisterium of the Church.

As such, I am moved to ask an important question; one that no one in the Holy See, to my knowledge, seems to be asking, even though it has serious implications.

What moved the Holy Father to appoint a commission to study a doctrine that was already part of the universal ordinary magisterium?

When one considers how much the simple fact of the commission’s creation contributed to the atmosphere of anticipation that existed before Humanae Vitae, and therefore contributed to no small degree to the havoc that ensued in its aftermath, the answer to this question would seem highly relevant to the relative “heroic virtue” of Pope Paul VI.

It would seem to me that a sober assessment of the pontificate of Paul VI prior to Humanae Vitae, to say nothing of his handling of the rebellion that ensued in its wake, gives the children of the Church far more to lament than to celebrate.

In conclusion, rather than applauding Humanae Vitae as an achievement of Paul VI, it is perhaps more appropriate to recognize it as solid evidence that points directly to the protection of the Holy Ghost who would allow no other outcome.