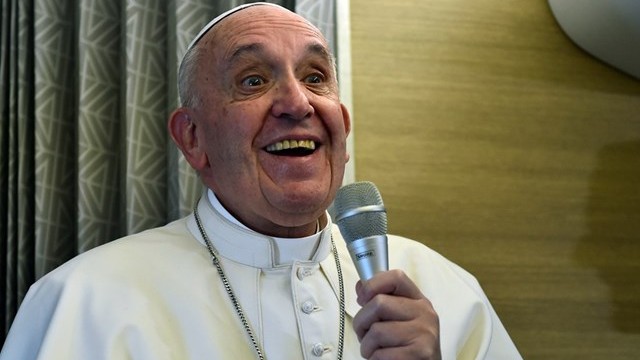 During the in-flight presser from Greece back to Rome this weekend, Pope Francis dropped yet another bomb; this one being a laser guided missile aimed directly at the Burkean deniers who insist that nothing has changed with the publication of Amoris Laetitia.

Asked whether or not, in light of Amoris Laetitia, new concrete possibilities for access to the sacraments now exist for those in “irregular situations,” Francis answered:

I can say “yes,” period, but it would be too small a response. I recommend all to read the presentation that was given by Cardinal Schönborn, who is a great theologian … In that presentation, your question will be answered.

NOTE: It just came to my attention that the Holy See website is misquoting Francis as saying, “I could say yes,” when in fact he said “I can say yes;” the latter removing all doubt. HT Life Site News.

OK, let’s play along and take a closer look at what Cardinal Schönborn had to say:

On the one hand there are marriages and families that are “regular”, that correspond to the rules, where everything is “fine” and “in order”, and then there are the “irregular” situations that represent a problem. Already the very term “irregular” suggests that such a distinction can be made very clearly.

As he goes on to make perfectly plain, neither he nor Francis favor such distinctions. In the words of exhortation, those who think that “everything is black and white close off the way of grace.” (cf AL 205).

My great joy as a result of this document resides in the fact that it coherently overcomes that artificial, superficial, clear division between “regular” and “irregular”…

The division between mortal sin and the state of grace is superficial?

Bear in mind, this is Francis’ answer to the question posed aboard Diabolical Spirit One. Yea, I’d say something has changed alright.

One can only assume, therefore, that Francis is likewise unmoved by Our Lord’s very own words:

You can’t any more black and white than that, my friends!

In any case, Schönborn continues:

Pope Francis’ Exhortation is guided by the phrase “It is a matter of reaching out to everyone” (AL 297) as this is a fundamental understanding of the Gospel: we are all in need of mercy! “Let him who is without sin among you be the first to throw a stone” (John 8, 7).

In AL, we find the following references to stones:

Rather than offering the healing power of grace and the light of the Gospel message, some would “indoctrinate” that message, turning it into dead stones to be hurled at others. (AL 49) A pastor cannot feel that it is enough simply to apply moral laws to those living in “irregular” situations, as if they were stones to throw at people’s lives. (AL 305)

Indeed, we can thank Cardinal Schönborn for making it entirely plain (in case it was not evident already) that Francis had the Gospel passage about the woman accused of adultery in mind as he wrote.

Upon reviewing this passage (John 8:1-11), one rightly observes that Our Blessed Lord was “simply applying the moral law” when He said, “Go, and now sin no more.”

As such, it becomes frightfully obvious that His Humbleness is accusing Jesus Christ Himself of withholding grace and casting dead stones!

Schönborn shed more light still on exactly what has changed with the coming of Amoris Laetitia, saying:

For me Amoris Laetitia is, first and foremost, a “linguistic event” … Between the two Synods of October 2014 and October 2015, it may clearly be seen how the tone became richer in esteem, as if the different situations in life had simply been accepted, without being immediately judged or condemned.

Cardinal Schönborn could hardly have been clearer:

The tone coming out of Francis’ Rome expresses esteem for recalcitrant practitioners of adultery, fornication and homosexual activities; not in spite of their sin, but because these sins have simply been accepted without judgment!

As such, Schönborn says, “No-one must feel condemned, no-one is scorned.”

He goes on to say, “But this encouraging outlook on families requires that ‘pastoral conversion’ we find in Evangelii gaudium.”

This is perhaps the central point:

According to modernists like Francis and his faithful sidekicks, it is the Church that must convert; not the people.

To the extent that Amoris Laetitia is confused as the voice of the Church (as opposed to what it is – the ramblings of a modernist madman) it will appear as if that conversion has indeed taken place.

This conversion also appears evident in Schönborn’s remark, “Pope Francis speaks of a profound trust in the hearts and the nostalgia of men.”

According to Schönborn’s presentation, and by extension Francis’ exhortation, a number of things stand out as “keys” to understanding Amoris Laetitia:

– Conflating persons and their sinful situations.

In Amoris Laetitia [one finds] … a profound respect when faced with every person who is never firstly a “problematic case” in a “category”, but rather a unique person, with his story and his journey with and towards God.

In other words, Judge not! This is an old trick of the progressives; to speak as if observing the objective reality of sin is tantamount to casting judgment upon persons. The truth is, however, when “unique persons” choose to persevere in sin, it can be said that they are not moving toward God, but away from Him!

– The Church’s understanding of marriage as an esoteric concept.

Throughout his relatively brief presentation, Schönborn consistently qualifies the discussion of marriage with terms like “Christian vision” or “Christian belief.” This is perfectly consistent with Amoris Laetitia wherein such qualifications appear dozens of times.

Obviously, Francis is unwilling to present Catholic doctrine as the objective truth as revealed by God; perhaps because he does not believe this to be the case.

– Marriage as expressed in Catholic teaching is presented as merely an “ideal;” a teaching described as artificial, abstract, theological and the opposite of attractive and desirable.

It is with this false idea in mind; namely, that marriage as taught in Catholic doctrine is but a pie-in-the-sky ideal, that Francis goes so far as to suggest that those who persevere in relationships defined by adultery, fornication and homosexual activity at times can do no better, and worse, can even be said to doing God’s will!

If indeed this be the case, then God is unjust; for He has by virtue of the Divine Law demanded the impossible.

as given in Casti Connubii:

No difficulty can arise that justifies the putting aside of the law of God which forbids all acts intrinsically evil. There is no possible circumstance in which husband and wife cannot, strengthened by the grace of God, fulfill faithfully their duties and preserve in wedlock their chastity unspotted. This truth of Christian Faith is expressed by the teaching of the Council of Trent. “Let no one be so rash as to assert that which the Fathers of the Council have placed under anathema, namely, that there are precepts of God impossible for the just to observe. God does not ask the impossible, but by His commands, instructs you to do what you are able, to pray for what you are not able that He may help you.”

According to Pius XI, the contention that the just are unable at times to fulfill the precepts of God – the same asserted by Francis in Amoris Laetitia – is a “calamitous error.” (ibid.)

The calamity is as yet unfolding and will become all the more plain in the weeks, months and years ahead as pastors and faithful alike no doubt fall prey to the Devil’s deception; otherwise known as the errors of Francis.

So, back to the question posed to Francis while flying the scandalous skies from Greece to Rome:

Has something changed with the publication of Amoris Laetitia or not?

At this, one can anticipate the Burkean deniers’ response:

Ah, but the doctrine hasn’t changed, indeed it cannot, regardless of a given pope’s attitude toward the same.

True enough, but the implicit oversight in this posture should be clear:

The attitude of the pope as expressed in an official document that is addressed to the entire Church does change the way in which people understand and live the doctrines of the faith; i.e., souls are at stake!

As such, it is fair to ask: Are the Burkean deniers – the Church Militants, the CNAs, the National Catholic Registers, etc. – more concerned with growing their brand than building the Kingdom of Christ?

As of this moment, the answer is painfully clear.

“They have no life”