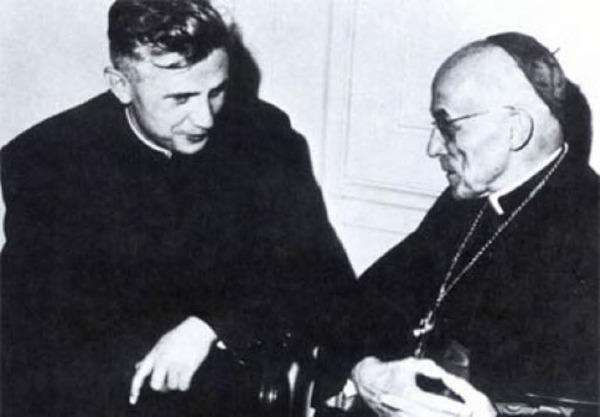 In his magnificent Encyclical, “On the Unity of the Church,” Satis Cognitum, Pope Leo XIII reiterated the Church’s long held doctrine concerning the divine constitution of the Holy Catholic Church.

Of particular interest given current events is the Holy Father’s treatment of the unique role of the Roman Pontiff, and the nature of the relationship between the Vicar of Christ and the bishops.

Pope Leo XIII tells us that the bishops are not “vicars of the Roman Pontiffs;” rather, “they exercise a power really their own, and are most truly called the ordinary pastors of the peoples over whom they rule.” (cf Satis Cognitum – 14)

This power, however, is dependent upon the bishops’ communion with Peter’s Successor.

This word “communion” is often misused in our day, but Pope Leo XIII makes it perfectly clear how the Catholic is to rightly understand this relationship, saying:

“The Epsicopal order is rightly judged to be in communion with Peter, as Christ commanded, if it be subject to and obeys Peter; otherwise it necessarily becomes a lawless and disorderly crowd.” (cf Satis Cognitum – 15)

The Holy Father tells us very plainly that the Roman Pontiff “rules the prelates.” (ibid.)

He goes on to say that “each Bishop is individually bound to obey” the pope’s authority, and he takes care to condemn as “opposed to the truth, and in evident contradiction with the divine constitution of the Church,” the idea that this is not the case for the bishops “taken collectively.” (ibid.)

It should be quite clear already at this point that the bishops, according to the will of Christ, are under and beneath the pope, but even so, the Holy Father removes all question when he refers to the Roman Pontiff as the bishops’ “master in authority.” (ibid.)

Now, I do realize that this is rather basic stuff; Catholicism 101, if you will, but I offer it in order to provide a better understanding of the Second Vatican Council’s forked-tongue treatment of the episcopate as proposed in the document, Lumen Gentium.

I refer to the conciliar text as such for the simple reason that the Council Fathers, as they so often do, speak out of both sides of their mouth on the matter.

On the one hand, they do say that the “Roman Pontiff has full, supreme and universal power over the Church and he is always free to exercise this power.” (LG 22)

So far so good.

At the same time, however, they are clearly at pains to make it appear as though the bishops are not so much subject to the pope who is their master in authority (the traditional teaching), but rather that they somehow rule the Church together with the Roman Pontiff.

The Council goes on to likewise speak in Lumen Gentium of the bishops as ruling with the pope some half-a-dozen more times!

Is this but a subtle deviation from the truth? Certainly, that is the Devil’s way, but make no mistake about it – it’s a deviation just the same.

If you have any doubt, simply ask yourself, is together with the same thing as subject to?

Of course not! Had the conciliar citations above contained the latter (“subject to”) as opposed to the former (“together with”), two things would have been accomplished:

One, the text would have more accurately and precisely reflected the true doctrine of the Church concerning papal primacy, and secondly, it would have met with the disapproval of the Council’s modernist bishops and their periti (theological experts).

One such peritus was Fr. Josef Ratzinger; present at the Council to assist the progressive Cardinal Frings of Cologne.

On October 11, 2012, the 50th anniversary of the Council’s opening, Pope Benedict XVI offered a personal reflection on the event wherein he suggested that the conciliar treatment of the episcopacy that we just reviewed was somehow necessary, saying:

“There was a need to amplify the doctrine of primacy from the First Vatican Council by giving greater weight to the episcopal ministry.”

Really? According to whom did this “need” exist?

Benedict doesn’t say, but notice how he, in typical modernist fashion, couches the idea of “giving greater weight” to the office of bishop as a matter of “amplifying” papal primacy.

Who is he kidding? It was the exact opposite!

In any case, keep this well in mind as we proceed…

Truth be told, Josef Ratzinger has ever been a man of the Council. In spite of the “traditional” label that is so often attached to his name, ascending to the Throne of St. Peter did nothing to change his decidedly conciliar orientation.

As pope, he remained convinced that the Council’s every last novelty can, and must, be received as if it stands in perfect continuity with the perennial Faith. (Recall his Christmas Message to the Roman Curia, 22 December 2005.)

This includes, of course, the specious proposition put forth repeatedly in Lumen Gentium; namely, that the Roman Pontiff in some way governs the house of the living God together with the bishops. Indeed, he even described it as necessary.

None of this is exactly news, so why do I do bring it up now?

I would submit to you that the Council’s fallacious treatment of the Church’s constitution; specifically as it concerns the bishops’ relationship to the Roman Pontiff, is the fertile ground whereupon the diabolical notion of a Petrine ministry endowed with a “collegial and synodal dimension” (see Archbishop Gänswein’s recent speech) initially took root and eventually blossomed in Benedict’s mind.

According to Gänswein, Benedict could so “expand” the papacy “because he had long thought through, from a theological point of view, the possibility of a pope emeritus in the future. So he did it.”

To precisely what theological point of view does the archbishop refer?

It certainly was not the one expressed so very clearly by Pope Leo XIII in Satis Cognitum, but rather the one so carefully crafted by the progressives at the Second Vatican Council in Lumen Gentium.

You see, convinced as he was that the conciliar proposition somehow “amplified” the traditional doctrine on papal primacy, Benedict had no difficulty imagining that a “quasi-shared” Petrine ministry would do the same.

Where the Council “amplified” the papacy; Benedict simply “expanded” it.

This is why it only makes sense that Archbishop Gänswein, no doubt speaking the mind of Benedict, would say that we have entered “a new stage in the history of the papacy” by which it is being “enriched.”

Mere men amplifying, expanding, and enriching the divine constitution of the Church as established by Christ – it’s all in a conciliar day’s work.

“With a final effort [Benedict] has strengthened [the Office of Peter],” Archbishop Gänswein concluded. “Of course, only history will prove this.”