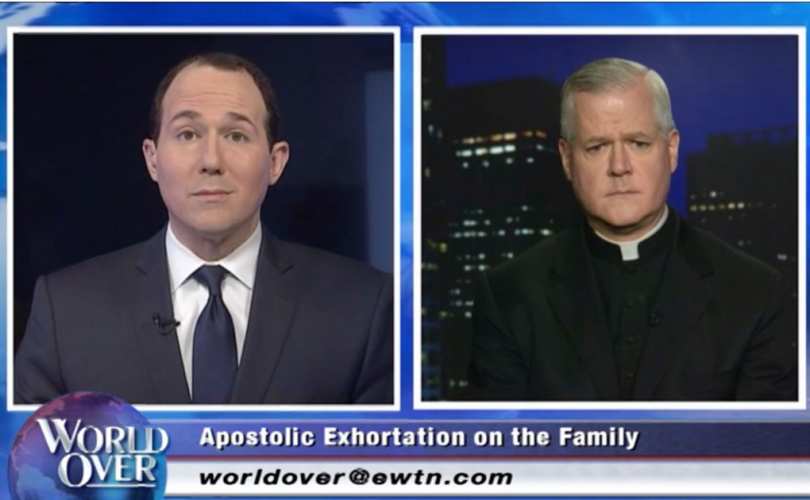 On a recent airing of EWTN’s World Over Live, host Raymond Arroyo interviewed Fr. Gerald Murray, a canon lawyer, and Robert Royal, president of the “Faith and Reason Institute,” to discuss Amoris Laetitia.

Throughout the segment, Arroyo and his guests expressed a considerable amount of angst over the impact that this document is likely to have moving forward; for instance, in the degree to which it will mislead the faithful while providing cover for priests who wish to invite those persisting in adultery and other serious sins to the sacraments.

By every conceivable measure, all three of these men are cut from neo-conservative cloth, and yet they tread where even Cardinal Raymond Leo Burke – the poster prelate of the movement – has not yet dared to go.

As such, I can agree with those who see this public criticism of Amoris Laetitia on EWTN as noteworthy, but let’s not get carried away – noteworthy doesn’t necessarily mean praiseworthy.

Some of my friends have suggested that Francis may have finally gone too far, and this program signals the beginning of a great neo-con awakening. Now, that’s a tantalizing thought, but I’m not convinced.

Consider, for example, the words used by Arroyo and his guests to describe the content of Amoris Laetitia:

Sure, it is all of these things, but one may just as accurately describe the majority of primetime television programming the same way. In other words, the level of outrage and alarm being expressed by these men in no way even comes close to matching the magnitude of pure evil that this document represents.

In fact, Robert Royal even saw fit to find cause for applauding certain parts of Amoris Laetitia, as if a scalpel can somehow be applied to the text in order to harvest holy tidbits, saying:

We’re in such a brittle, polarized period in the Church as well as in the world, people see something that makes them nervous about marriage and Communion for the divorced and remarried and they assume that the entire document is corrupt or is unfaithful to the teachings.

From there Royal went on to talk about the document’s treatment of “controversial issues” like contraception, abortion, and so-called “gay marriage,” etc.; i.e., matters about which Church teaching is exceedingly clear.

On these points, Royal tells viewers, Francis and his Love Letter to Lucifer, Amoris Laetitia, “is absolutely rock solid.”

So, let me make sure I understand this correctly…

Francis serves anthrax infested horse manure to the children of the Church, but since he went out of his way to cover it in chocolate, bless his humble heart, we mustn’t be so “brittle” as to assume that the entire meal is corrupt.

Later in the segment, Royal criticizes some of the words repeatedly used by Francis in reference to objectively sinful situations; terms such as irregular, imperfect, less-than-ideal.

He says, and rightly so, “this is not the language of the Gospel” wherein we find far more stark phraseology; like sin, virtue, right, wrong, etc.

“The thing that worries me about that,” Royal frets, “is that there’s always an excuse for everything, and any circumstance you find yourself in you can explain.”

Fair enough, but then what does he do? He goes on to offer excuses and explanations for the sins of Francis!

We understand that this Holy Father is a very charismatic man, he very much feels what other people need from him … But there’s a way in which everybody’s virtues can also be vices, without going into too much detail about this, I think it could be said that there’s a point at which the Hoy Father runs the risk of by trying to be so comforting to people that he actually loses some of the holiness that people are called to.

It must correspond to something in the Holy Father’s experience, because he does this quite often. He’s very angry about rigidity and what he sees as people being coldhearted toward sinners, and we can understand that part of it.

So you see, folks, even though Francis is leading souls straight to Hell, we must understand that it’s likely just because he cares a little too much, according to Robert Royal.

The truth of the matter is, however, Francis isn’t comforting to a fault; he’s quite literally the most dangerous man on the planet disguised as a kindly uncle.

Fr. Murray, for his part, acquitted himself somewhat better, but being that he is uniquely configured to Christ for the care of souls, the bar is set much higher, and let it be said that he too failed to adequately address the menace that is Francis head-on.

“I don’t want to criticize the pope,” Fr. Murray stated, “I think the pope is a wonderful man. I think he’s a holy man in so many ways. I hope to be a good man and holy myself.”

What is this, a praise-the-pope competition for crying out loud?

Apparently a dose of reality is in order.

How wonderful is Francis? So wonderful that he openly ridicules the gifts that are given to him by his children, aka “Rosary counters.”

How good is Francis? So good that he rebuked a women for daring to trust in the Lord by welcoming the gift of another child in spite of previous C-sections and then bragged about it to international media.

How holy is Francis? So holy that he can’t manage to genuflect before Christ in the Blessed Sacrament but has no problem dropping to his knees when the Humblecam is rolling.

Now that we have that cleared up, Fr. Murray continued:

I don’t judge, but what I will say is when you do something in public that contradicts what your predecessor did, there has to be an accounting for it and a responsibility to upholding the gospel and I think that’s what many bishops, cardinals and priests will call for.

First, not only did Francis contradict what a predecessor did (presumably in this case he is referring to Pope John Paul the Great Ecumenist and Familiaris Consortio); he contradicted nearly two thousand years of Catholic teaching and practice. In truth, Francis could contradict John Paul II in a hundred different ways and his reward would be great in Heaven for doing so!

Now, I don’t want to read too much into this, but one discerns in Fr. Murray’s comment one of the fundamental errors of the neo-cons. You see, for them, “Magisterium” is frequently misunderstood as whatever the pope happens to say, or what the Council said, as opposed to being what the Church has always said.

In other words, while they sometimes do well to recognize certain problems (like Amoris Laetitia), they all-too-often view matters through the wrong lens.

In any case, I find it curious that Fr. Murray is looking forward to seeing Francis held to account by “bishops, cardinals, and priests.”

Midway through the program, Fr. Murray quotes what I believe to be perhaps the most dangerous portion of Amoris Laetitia, saying:

This is another area in the document that needs to be examined, because the pope says earlier it can no longer be presumed that people that find themselves in irregular situations are in a state of mortal sin. And I would say that’s problematic to say that.

This needs to be examined? It shouldn’t take more than 5 seconds for a poorly catechized high school student to recognize that this statement isn’t just problematic; it’s flat out heretical!

If this is what the Santo Subito crowd considers holding Francis accountable for his blatant disregard for the Divine Law and immutable Catholic doctrine, then rest assured, my friends, there will be no neo-con awakening coming any time soon.

In the meantime, we need to continue urging them, in no uncertain terms, to join us on the front lines as opposed to simply tiptoeing about the perimeter of the battlefield, while praying that the scales may soon fall fully from their eyes.

Look, I speak from experience on this note. It wasn’t all that long ago that I too was infected with neo-conservatism, welcome to speak in allegedly “orthodox” parishes and dioceses, and running in such media circles as CMTV, CNA, and EWTN.

Back then, I thought that one did well to highlight the “rock solid” portions of the conciliar texts; i.e., those parts that simply re-present what had already been taught elsewhere far more clearly.

By the grace of God (often made present to me via the persistence of those whose eyes were opened to the truth), I’ve since come to realize that the Biblical caution about “a little leaven corrupting the entire lump” applies precisely to such situations as these.

I’ve also come to realize that using whatever public platform I have been given to focus on warning others about the corruption wrought by the leaven of error, loudly and clearly, is a solemn obligation and a source of blessing – regardless of any earthly ridicule, hardship, or persecution this may invite.

May the good Lord grant us all the grace of perseverance.

The Sacred Liturgy and the Rule of Belief