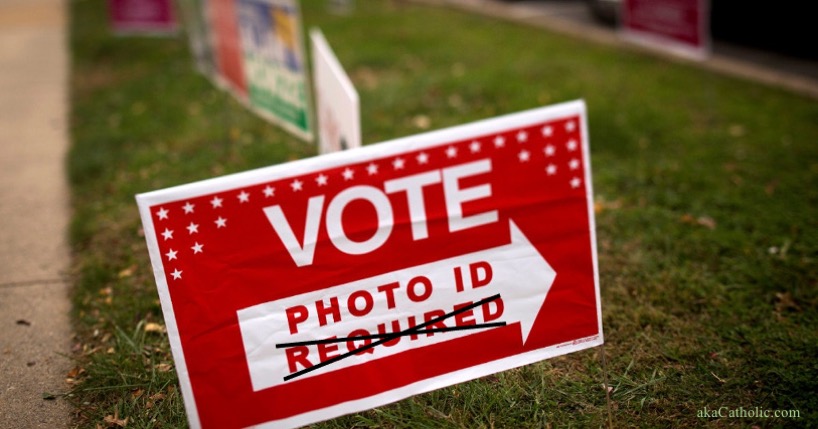 In January of 2019, the LA Rams faced the New Orleans Saints in the NFC Championship game. The winner would move on to the Super Bowl, the loser to a long off-season of pondering what might have been.

With the score tied and less than two minutes remaining in regulation time, a Rams defender clearly interfered with a Saints receiver on a pass that had game-winning touchdown written all over it. The penalty was entirely obvious, but the referees failed to make the call. Quite simply, the rules of the game were not enforced, and the Rams went on to win in overtime.

If it’s not clear to readers already, this incident has come to mind thanks to the current controversy surrounding the U.S. Presidential Election. In the present case, the sentiments expressed by TJ Holmes are just as appropriate:

You don’t have to be a Trump supporter to be upset by this. You don’t have to be politically active, or even an American, but just a proponent of basic lawfulness. Are we gonna sit down in a few weeks to watch the Presidential Inauguration and wonder, is the right man in the White House? Well, the integrity of every U.S. Presidential Election is in question.

So-called “free and fair” elections, however, are no game. Nor is it the case that the outcome of Election 2020 has been marred by mere human error on the part of one or two men who failed in a fleeting moment. Rather, all indications are that the election results have been deliberately skewed by way of a well-planned, coordinated effort on the part of many bad actors with willful disregard for the law.

Election fraud in this case is entirely obvious to every intelligent person of goodwill willing to examine the facts, and yet there are any number of persons Hell bent on looking the other way and, ultimately, denying it.

First among them are the godless liberals. Given that these persons are so detached from reality as to insist that abortion is healthcare and males can become females – to say nothing of the fact that their candidate of choice is the one claiming victory – this comes as little surprise.

More unexpected, however, are the so-called “conservative” Catholic election fraud debunkers who are publicly repeating leftist talking points about gullible Trump supporters and conspiracy theories. Though they’re pleased to admit to the perennial existence of some fraudulent votes, they’re quick to add, but certainly not enough to sway an election.

These self-proclaimed voices-of-reason, some of them well-known in Catholic media circles, are scattered across my social media feed, haughtily looking down their noses at the riled up right.

At first glance, this may come as a shock given that such persons would never admit to casting a vote for a Democrat. In reality, however, it makes just as much sense for a conservative Catholic voter to take such a position as a godless liberal Biden supporter.

Before we get to that, we must first consider their ultimate go-to argument against the “deplorable conspiracy theorists,” which goes something like this:

I don’t know the extent of election fraud and frankly neither do you.  So far, there have been many claims, but no credible evidence.

Eyewitness testimony is enough to justly condemn a murder suspect to death, and yet not even hundreds of sworn affidavits signed by citizens who are willing to risk jail time should they be caught in a lie are considered credible evidence to these people. All indications are that nothing short of an unassailable video of a crime being committed, or a tearful public confession, will suffice.

In cases concerning fraud, however, this type of evidence rarely exists. This does not mean that one cannot know with a high degree of certainty that a crime was actually committed.

By way of analogy, consider the CFO of a large corporation signing off on financial statements littered with entries that defy any reasonable explanation; e.g., expenses recurring at a frequency well above historical trends, the cost of common goods exceeding known market value, net deposits falling well short of reasonable expectations based on gross revenues, etc.

When confronted with the possibility of a forensic audit that could conclusively clear his good name, the CFO takes pains to prohibit it, while critical receipts that might set the record straight are destroyed.

In a case such as this – similar elements of which are present in Election 2020 – it’s not necessary to actually witness anyone in the act of embezzlement in order to know, beyond a reasonable doubt, that a crime has been committed and, furthermore, that the bottom line tallies are fake. The facts, the figures and the behavior of key personnel alone tell the tale.

Perhaps a better analogy would be a senior manager in a publicly held company who repeatedly purchases large numbers of shares of their stock just before major public announcements cause the stock price to soar. Imagine this same investor taking a short position in large numbers of shares just prior to negative news being released that causes the stock price to plummet.

Now, is it possible that this person may have played by the rules, using public information alone to make some wise investments, without any foreknowledge of future events?

Sure, one may argue that it’s within the realm of possibility,  but if it’s statistically highly unlikely, you can be sure that the Securities and Exchange Commission isn’t going wait for a recording of the alleged wrongdoing to surface before seeking a conviction for insider trading. (Unless, of course, the trader is a member of Congress!)

In the case of Election 2020, readily available data measured against well-established statistical norms, along with the publicly known timeline of events and the evasive behavior of elections officials, plainly attest to the presence of substantial fraud in large Democrat strongholds located within a select group of swing states.

Even where the numbers are within the realm of the conceivable, the odds of multiple events aligning in the way they allegedly occurred are infinitesimal, that is to say, the scenario we are being asked to accept is statistically impossible – not because the Trump team says so, but because the objective data and historical record say so.

The debunkers can examine the facts for themselves (though few seem interested), with the following article being a good place to start: Reasons why the 2020 presidential election is deeply puzzling

Thus far in my reading, however, I’ve not come across even one neo-con Catholic “debunker” who has delved into the data while offering a plausible explanation for the numerous glaring anomalies that plainly exist in the “official” election results; e.g., the unprecedented events that coincidentally occurred in multiple battleground states at roughly the same time.

Is it perplexing that a neo-con Catholic should stake out such an irrational position?

It may initially seem so to some, but it actually makes perfect sense based on their religious modus operandi.

You see, these are the very same persons who complain about the ecclesial implosion and doctrinal disfunction that has been taking place since the early 1960’s, but who adamantly deny any real connection to Vatican II, which they steadfastly insist was a valid ecumenical council of the Holy Roman Catholic Church.

They also happen to be among those who are quick to downplay the many faithless and even heretical words and deeds of Jorge Bergoglio (stage name, Francis), while insisting that the man is not only a member in good standing of the Catholic Church, he is her visible head on earth and the Vicar of Christ!

For the neo-con Catholic, nothing short of Francis standing before the global media in blue jeans and a tee shirt to openly renounce the one true Faith will suffice to demonstrate that he is anything other than the Holy Roman Pontiff!

In this, they share something very basic in common with the godless liberals; each of them have, by an act of the will, chosen to distance themselves from objective reality, albeit in varying degrees. In so doing, they have relinquished a portion of the gift of reason and, with it, their ability to think clearly.

The bad news is that the blindness of neo-con Catholic election fraud debunkers is  primarily the result of a spiritual malady; i.e., well reasoned arguments based on objective facts are of little or no avail.

The good news is that the dreadful circumstances under discussion here are drawing these spiritually depleted persons out of the shadows and putting them on display for all to see.

In January of 2019, TJ Holmes, commenting on the “integrity of the Super Bowl” vis-à-vis the NFC Championship game, rhetorically asked of the NFL, “What are you going to do about it?”

Two years later, we know the answer: Nothing that changed the result.

Election 2020 is in overtime. Let us pray to the Just Judge that the unadulterated truth, whatever it may be, will emerge and be embraced by all, so that confidence in the integrity of the outcome may be restored.

The State’s Authority over the Church: Since when?