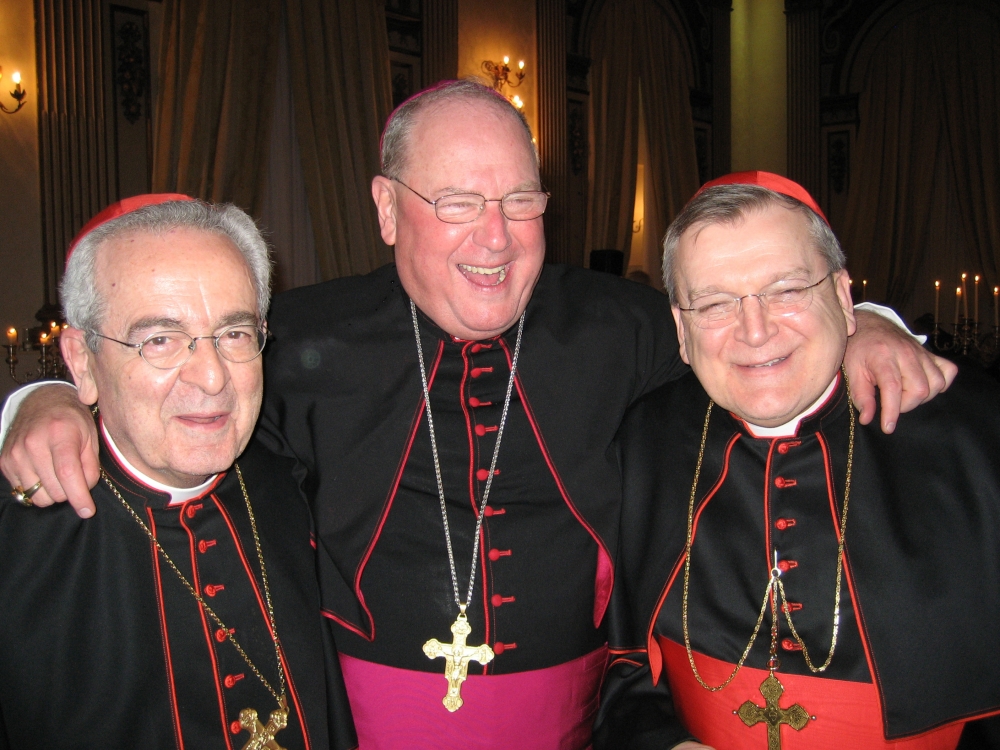 Cardinal Burke has given a statement to the Dignitatis Humanae Institute with the intent of clarifying certain of the comments that were attributed to him in a recent interview with BuzzFeed News.

As reported by BuzzFeed, Cardinal Burke said the pope had “done a lot of harm” by not stating “openly what his position is.”

The headline of the DHI posting maintains that the BuzzFeed quote above is a “major misrepresentation” of Cardinal Burke’s actual words.

Why Cardinal Burke now feels compelled to split rhetorical hairs in order to create distance between himself and the plain meaning of his very own words is unknown to me, but let’s not kid one another; that is precisely what he is doing.

Following is the operative part of the BuzzFeed interview transcript, which all parties concerned, including Cardinal Burke, have confirmed as accurate:

BuzzFeed News: To the question of how that’s being done, presumably the pope was the one who asked Cardinal Kasper to frame the synod. Are you saying that [the pope] is the one who is manipulating these proceedings?

Cardinal Burke: The pope has never said openly what his position is on the matter and people conjecture that because of the fact that he asked Cardinal Kasper — who was well known to have these views for many, many years — to speak to the cardinals and has permitted Cardinal Kasper to publish his presentation in five different languages and to travel around advancing his position on the matter, and then even recently to publicly claim that he’s speaking for the pope and there’s no correction of this.

I can’t speak for the pope and I can’t say what his position is on this, but the lack of clarity about the matter has certainly done a lot of harm.

BuzzFeed News: Would it be inappropriate for the pope to do that? To structure the conversation in such a way that it is consistent with his thinking?

Cardinal Burke: According to my understanding of the church’s teaching and discipline, no it wouldn’t be correct.

OK, this isn’t real complicated, folks, but for the dull of intellect, let’s go through it step by step:

Cardinal Burke readily confirms that he said, “The pope has never said openly what his position is on the matter … the lack of clarity about the matter has certainly done a lot of harm.”

Is it a “major misrepresentation” to say that Cardinal said that the pope has done a lot of harm?

Perhaps an analogy will help.

Imagine a married man who refuses to tell his wife whether or not he loves her even in the midst of a terrible marital crisis wherein the poor wife is consumed with doubt as to her husband’s affections. Needless to say, the crisis, such as it is, would effectively be put to rest if only the calculating, untrustworthy twerp would simply man up and openly declare where he stands.

According to the dictates of Cardinal Burke’s post-interview spin job, it would be wrong in this case to attribute the damage being inflicted upon the marriage to the husband, because technically it isn’t really he whose to blame but rather his childish unwillingness to behave like a real man.

If you buy into that line of argument, or Cardinal Burke’s “clarification,” I’m sorry, but your stupidity is likely terminal and I can do nothing for you.

Now let’s take a closer look at the second part of the selected quotes from the interview transcript provided above, which is arguably even more telling than the first.

BuzzFeed asked Cardinal Burke if it would be inappropriate for the pope to structure the Synod “in such a way that it is consistent with his thinking.”

Cardinal Burke answered, “According to my understanding of the church’s teaching and discipline, no it wouldn’t be correct.”

This is very telling indeed.

In truth, it would only be inappropriate for the pope to structure a Synod according to his own thinking if indeed his “thinking” is out of step with “the Church’s teaching and discipline.”

For example, if Pope St. Pius X had convened a meeting of bishops to discuss matters of importance for the Church and took deliberate steps to see to it that their conversation was ordered according to his thinking, such would be not only entirely appropriate; it would be a great blessing for the Church and an effective exercise of his papal duties.

We can say this because we know very well that the thinking of this true Saint of Holy Church was entirely in step with the mind of the Church as it relates to teaching and discipline. No brainer, right?

So, how is it that Cardinal Burke can contend the exact opposite in the case of Pope Francis?

The answer is simple; he like everyone else with a pulse knows damned well that the current Bishop of Rome does not think and feel with the Holy Catholic Church on any number of matters, including those under discussion at the most recent Synod of Bishops.

So, what have we learned?

Well, since Cardinal Burke is far from stupid, in spite of his patently ludicrous attempt to explain away the plain meaning of his words, it seems entirely clear that His Eminence, for all of his good points, is also infected with the diabolical disorientation of which Our Lady warned.

And that, my friends, is the bottom line.

The problem at hand in the Church today is first and foremost spiritual. There is no one, and I mean absolutely no one in Rome capable of fixing this mess other than a pope, current or future, who is willing to do as Our Lady of Fatima requested. Only she can cure the terrible illness that currently afflicts us.

Francis’ biggest mistake: Probably not what you think