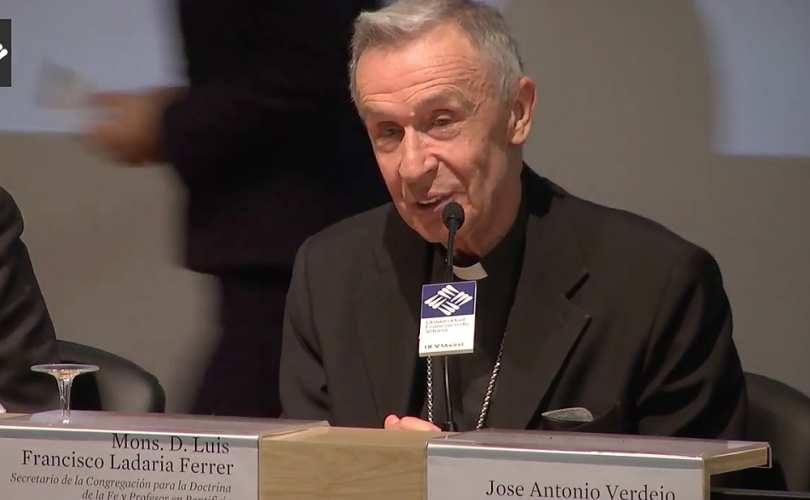 Prefect of the Congregation for the Doctrine of the Faith, Archbishop Luis F. Ladaria Ferrer, has sent a letter in the name of the CDF, under the title Placuit Deo, to the Bishops of the Catholic Church On Certain Aspects of Christian Salvation.

Any number of other writers have commented reasonably well upon the text. For that reason, I will focus on but one singular point that I’ve not seen developed elsewhere; one that may well be considered a key to its reading.

The first thing that jumps out at the faithful Catholic is the topic, Christian Salvation; as if there is any other kind.

The first occurrence of this phrase that I was able to find on the Vatican website dates back to 1976 (under the pontificate of the soon to be awarded Paul VI) in a text produced by the International Theological Commission.

This, I suppose, is what passes for “the greater tradition of the faith” mentioned in the first paragraph of the text.

Needless to say, this manner of speaking is par for the post-conciliar course as Modernist Rome has long since embraced the lie that all religions offer a path to salvation.

That said, I strongly suspect that the primary motivation for so carefully qualifying this treatment of salvation is much more specific; it was done first and foremost in deference to, and perhaps even with input from, the Jews.

Though the text of the Letter was made public just last week, it was adopted in the Plenary Session of the CDF held on 24 January 2018.

This came just one month after various Dicastery heads had entered into consultation with their “elder brothers” at the Vatican in order to discuss their plans for the future.

According to a report dated 2 January 2018 from the International Council of Christians and Jews:

The report tells us that the IJCIC is “is composed among others, of the American Jewish Committee (AJC), the Anti-Defamation League (ADL), B’nai B’rith International, the World Jewish Congress (WJC), and delegates of the major branches of Judaism today — the Orthodox, Conservative, and Reform/Liberal movements.”

In other words, it includes a who’s who list of evil doers as the IJCIC represents the interests of those who wish to construct a City of Man, not just independent of the Sovereignty of Jesus Christ as if ignorant of His authority, but rather in bold opposition to Our Lord and His Kingdom.

The fruits of their collective efforts are well known as self-identified Jews among this group are at the very forefront of such movements as radical environmentalism, abortion and other efforts aimed at population control, so-called gender nonconformity, and homosexual activism, just to name the most obvious.

According to the IJCIC report:

The conversations covered an extremely wide range of issues. The 16 Jewish representatives learned about the Vatican’s vast new and ambitious project of reducing the number of its separate sections while merging them into large dicasteries, with the hopes of producing simplified and stronger units and unities. The Jewish delegates responded by offering closer cooperation…

At this, let’s take a look at how the Vatican’s “closer cooperation” with the Jewish enemies of Christ the King has already borne fruit in Placuit Deo, a text they no doubt find most acceptable.

First, let us acknowledge that this letter is a masterpiece of subtlety; offering tidbits of truth alongside equivocations and deflections that serve to water it down to the point of drowning the ignorant. This, of course, is the hallmark of all diabolical endeavors.

Some, I suspect, will accuse me of reading too much into the text, but I for one have little doubt that the words I am about to highlight were chosen very deliberately and in large measure for the reasons given.

Early on, the Letter addresses the problem at hand by stating:

Both neo-Pelagian individualism and the neo-Gnostic disregard of the body deface the confession of faith in Christ, the one, universal Savior.

Hey, not bad, eh? After all, it does say that Christ is the one, universal Savior!

One notes that the text is very careful to frame neo-Pelagianism and neo-Gnosticism not as an attack against immutable truth, but rather as an offense against “the confession of faith in Christ.”

In other words, if one doesn’t happen to confess faith in Christ, no harm no foul.

Placuit Deo reads like an internal memo that aims only to speak about what we believe as Christians. Fair enough, I suppose, but the problem lies in the fact that it was, by all appearances, deliberately written in such a way as to reassure rather than convert those who do not confess faith in Christ; in particular, the Jews.

Consider, the Letter immediately goes on to pose a rhetorical question:

How would Christ be able to mediate the Covenant of the entire human family, if human persons were isolated individuals, who fulfill themselves by their own efforts, as proposed by neo-Pelagianism?

Sounds pretty good, no? That is, until one asks a question of their own:

Is it merely coincidence that the text poses a question here as opposed to plainly stating what St. Paul wrote in his Epistle to the Hebrews concerning the mediation of Christ?

In other words, does this amount to nothing more than an innocent attempt to engage the reader via the use of a common linguistic tool, or is it a deliberate attempt to avoid speaking the following truth:

And therefore he is the mediator of the new testament: that by means of his death for the redemption of those transgressions which were under the former testament, they that are called may receive the promise of eternal inheritance. (Hebrews 9:15)

You see, St. Paul makes it known that the mediation of Christ is such that the salvation of the Jews lies in Him; the former testament being of no avail whatsoever with regard to the attainment of eternal life; a truth that the authors of Placuit Deo dare not proclaim in plain language.

Having danced to the Klezmer of their Jewish mentors thus far, they then dutifully set about posing yet another rhetorical question:

Also, how could it be possible for the salvation mediated by the Incarnation of Jesus, his life, death and Resurrection in his true body, to come to us…

NB: How could salvation come to whom? To us…

Placuit Deo begins to answer its own questions by stating:

The present Letter wants to reaffirm that salvation consists in our union with Christ… [Emphasis added.]

Here we have a letter addressed to the bishops of the Catholic Church that aims to speak very specifically of Christian salvation; that is why it does not plainly state that salvation consists in mankind’s union with Christ, but rather of “our” – meaning, the Christian’s – union with Christ.

As for the Jews, as you will see, they’ve always been good-to-go.

You gotta admit, the Devil is damned good at this game, and he’s just getting warmed up as the text then goes on to say:

At no moment in history did God stop offering his salvation to the sons and daughters of Adam (cf. Gen 3:15), establishing his covenant with all of humanity in Noah (cf. Gen 9:9) and, later, with Abraham and his descendants (cf. Gen 15:18).

Did God really offer salvation to those who came before Christ, or did He, “when the fullness of time was come,” make good on the promise made to Adam and Eve following their fall from grace as recorded in Genesis 3:15, “that he might redeem them who were under the law”?  (cf Galatians 4:4-5)

Faithful Catholics know the answer, but just to be perfectly clear, let’s listen to our first pope expound upon salvation vis-à-vis the promises made to the patriarchs:

Of which salvation the prophets have inquired and diligently searched, who prophesied of the grace to come in you. Searching what or what manner of time the Spirit of Christ in them did signify, when it foretold those sufferings that are in Christ and the glories that should follow. To whom it was revealed that, not to themselves but to you, they ministered those things which are now declared to you by them that have preached the gospel to you: the Holy Ghost being sent down from heaven, on whom the angels desire to look. Wherefore, having the loins of your mind girt up, being sober, trust perfectly in the grace which is offered you in the revelation of Jesus Christ. (1 Peter 1:10-13)

NB: The gratuitous gift of salvation is offered in Jesus Christ and in Him alone. And yet the CDF Letter is at pains to suggest that the Old Covenant was, and remains, salvific for the Jews in and of itself.

If there was any question as to whether or not the aforementioned text is intended to placate the Jews, the answer is given just two sentences later where we read:

By choosing a people to whom He offered the means to fight against sin and to draw close to him, God prepared the coming of “a powerful Savior, in the house of David, his servant” (Lk 1:69).

By choosing a people…

The text is referring to the “chosen people;” those who dwelt, and presume to declare that they presently dwell, in the Old Covenant.

So, one wonders, exactly how did God offer them “the means to fight against sin”?

If the text means to suggest that the Jews have been endowed by God with the means to defeat sin, the wages of which is death, the answer is that He did not. That victory exists only in Christ Jesus whom the Jews have rejected, but far be it for the Congregation for the Doctrine of the Faith to say as much in a Letter that proposes to speak of salvation.

In conclusion, while one can cite any number of Catholic statements in the text of Placuit Deo, don’t be fooled:

It was clearly written in deference to Our Lord’s enemies and should be consigned to the incinerator along with so many other conciliar and post-conciliar texts.

Let us pray for those who collaborated to produce it, whether they identify as Catholic or Jew, that they may be given, and accept, the grace of conversion and the offer of salvation, before it’s too late.

The concupiscence of Christ

MISSING: The SSPX’s once militant spirit