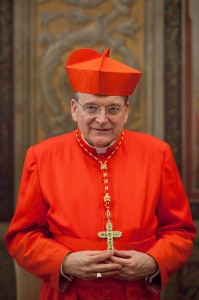 In his recent interview with Raymond Arroyo of EWTN, Cardinal Raymond Leo Burke fired two distinctive warning shots directly across the bow of the Good Ship Francis, even as most observers seem not to have noticed.

Much of the commentary concerning the interview seems to focus on two areas in particular, the first being Cardinal Burke’s insistence on the necessity of denying Holy Communion to pro-abortion politicians, a subject he has addressed any number of times in the past.

When news broke on Monday that the pope had not renewed Cardinal Burke’s membership in the Congregation for Bishops, and had newly appointed his polar opposite when it comes to placing Our Blessed Lord in the blood stained hands of pro-abortion politicians, Cardinal Wuerl of Washington, D.C., some posited that the interview had played a role in the move.

While I seriously doubt that this was the case as this decision was almost certainly made well before the interview, it is at one and the same time unsurprising and significant.

Secondly, a lot of attention has been given to Cardinal Burke’s reaction to the Holy Father’s statement that it’s not necessary to speak about issues such as abortion and homosexuality “all the time.”

“It’s a text that’s not altogether easy to interpret,” Burke said in the interview.

Now, let’s be clear, Cardinal Burke is not implying that there are issues regarding the way in which the comments were translated from Italian to English; rather, he is saying that it’s not easy to reconcile what the pope actually said with the concrete realities of the world in which we live when viewed in the light of Catholic teaching.

“My response is what could be more essential than the natural moral law? In other words, these acts that are always and everywhere evil; they’re the first commands of our conscience, to respect human life, to respect the integrity of the family and to respect conscience. And so to me the pope can’t be saying… I can’t interpret that phrase of his as saying that these are not essentials,” he said.

“I’m not exactly sure why he mentioned it,” Cardinal Burke continued. “One gets the impression, or it’s interpreted in this way in the media, that he thinks we’re talking too much about abortion; too much about the integrity of marriage as between one man and one woman, but we can never talk enough about that.”

Even though many traditionalists were longing for Cardinal Burke to abandon all nuance in addressing the foibles of Francisco, one should appreciate the fact that, as far as “cardinal-speak” goes, these comments are about as close to a public rebuke of the pope as we’re going to get from the likes of Cardinal Burke, for the present moment anyway.

In time, I suspect, rebukes of this nature will become, by necessity, more plainly delivered, which brings me to the most significant, but largely overlooked, portions of the interview.

When asked by Arroyo, “What has the ‘Francis Effect’ been from your vantage point, and what are you seeing among the Curia, particularly as he moves these reforms forward,” His Eminence took aim.

“I’ve made this statement, and I believe it is correct, I cannot imagine a reform of the Roman Curia that would not somehow be continuous with Pastor Bonus, the Apostolic Constitution which has governed the Roman Curia since I think 1988, when Blessed John Paul II reformed the Roman Curia,” he said.

“Because the Church is an organic Body, and the service of the Roman Curia is part of the very nature of the Church, and so that has to be respected. And so I cannot imagine that somehow the Roman Curia is going to take on a completely different figure. It just doesn’t make sense.”

This, my friends, is a pretty clear warning shot from Cardinal Burke in the face of the Holy Father’s “synodal” aspirations. He is reminding all concerned that the Church’s hierarchical structure is not an extension of any given pope’s personal preference; rather, it’s reflective of her very essence.

In a very concrete way, Cardinal Burke is confronting – again, about as directly as one can expect at the present moment – the notion put forth by the Holy Father’s handpicked head of the so-called “C-8,” Cardinal Óscar Andrés Rodríguez Maradiaga, who said in a recent interview  with Fr. Thomas Rosica, “[Pastor Bonus] is over, now it is something different. We need to write something different.”

With regard to the possibility of Summorum Pontificum being overturned, Cardinal Burke said, “I don’t see it as a possibility on a couple of scores. Number one, it’s universal legislation, and to reverse it would be a very serious act on the part of the Holy Father, and would have to have the most serious of reasons.”

Make no mistake; in spite of deliberate nuance, His Eminence is firing yet another clear warning shot.

While one might understandably be perplexed by Cardinal Burke’s follow-up statement, “Pope Francis hasn’t shown any inclination to change anything with regard to the celebration of the Extraordinary Form,” especially in light of the situation with the Franciscan Friars of the Immaculate (FFI), which the cardinal failed to even mention, be neither fooled nor overly troubled by the subtlety.

As for the suggestion that Pope Francis’ “inclinations” with regard to the traditional Mass are pure, this is either pure delusion, or a deliberate effort to nudge the Holy Father in the right direction. To be sure, Cardinal Burke is not deluded.

Secondly, he failed to mention the FFI debacle specifically, not because its relevance is lost on him, but precisely because he recognizes just how gravely serious that situation truly is, and he did so, in part, perhaps for the very same reason a U.S. Supreme Court justice won’t speak about a case that is expected to come before the court.

Cardinal Burke went on to say, “In the Apostolic Exhortation [EG] he [the pope] makes a comment about people being too concerned about the sacred liturgy and so forth, but I don’t think that that could be interpreted as being a negative statement with regard to Summorum Pontificum…”

So, what is one to make of all of this?

What we have here, it seems to me, is the “Chief Justice” of the Church – importantly, even as the FFI situation is still unfolding – saying to a pope whose liturgical sensibilities couldn’t be further from his own, “Personal opinions about how much ‘concern’ for the sacred liturgy is appropriate are one thing, actions undertaken relative to Summorum Pontificum are quite another; the latter being a matter not of ‘ideology,’ but of universal legislation.” In other words, tread lightly, Holy Father.

To those who are disappointed by the degree to which Cardinal Burke’s statements were carefully worded, all I can say is be patient.

In time, barring a dramatic change in what appears to be the direction in which Pope Francis intends to lead (something for which we must pray and fast), these highly nuanced warning shots will eventually give way to more direct salvos in defense of the Church, her liturgy, and her venerable doctrines, and not just from Cardinal Burke.

What ever happened to the call to conversion?