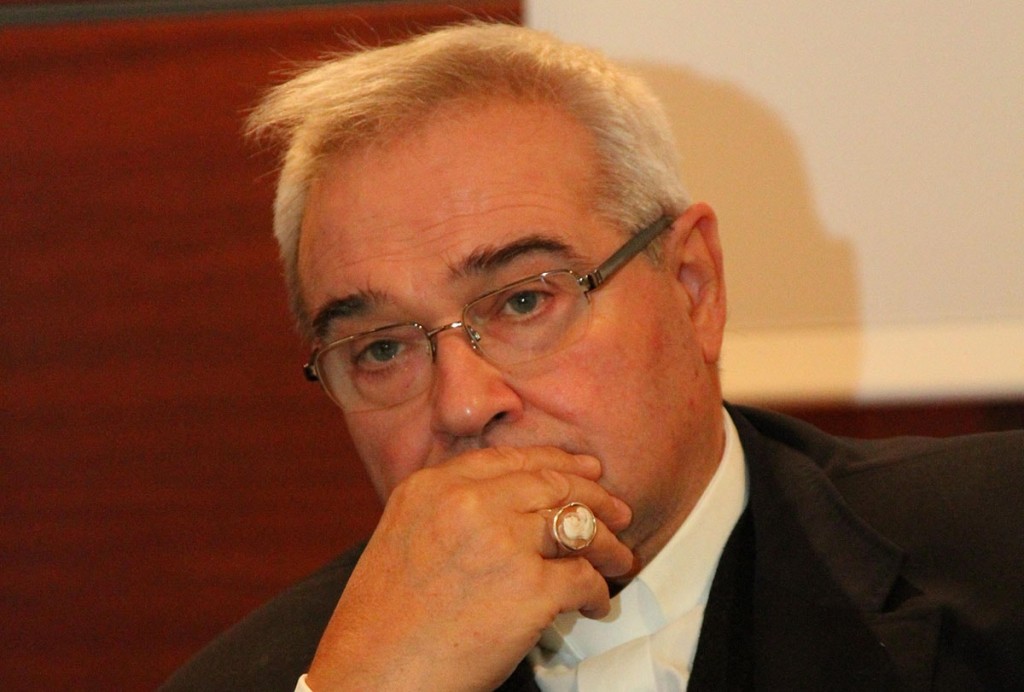 In an interview with the Italian online news outlet, Rimini 2.0, the retired Archbishop of Ferrara-Comacchio, Luigi Negri, said that Pope Benedict XVI “suffered tremendous pressures” to resign the papacy.

In December 2015, it was reported that the Archbishop was overheard criticizing Francis while in conversation with his priest-secretary aboard a train to Rome; even going so far as to say that he wished the humble Argentinian dead.

In any case, Archbishop Negri, who long has had a reputation for being among Italy’s leading “conservative” prelates, remains close to Benedict the Abdicator.

When asked during his recent interview with Rimini to comment on Benedict’s “renunciation of the papacy,” Negri said:

“It was an unprecedented gesture. In recent meetings, I’ve seen a physically frail man, but very lucid in thought.”

Once again, the lie is given to Benedict’s claim that he lacked the “strength of mind” to continue in the papacy back in 2013. (Keep this unfortunate fact in mind, if you dare.)

I have little factual knowledge – thankfully – of the Roman Curia, but I am certain that one day grave responsibilities inside and outside the Vatican will emerge. Benedict XVI has suffered tremendous pressures. It is no coincidence that in America, even on the basis of what has been published by Wikileaks, some Catholic groups have asked President Trump to open a commission of inquiry to investigate whether the administration of Barack Obama exerted pressure on Benedict. It remains for now a serious mystery, but I am sure that the responsibilities will come out.”

This excerpt taken from the body of the Rimini article is clear enough, but the headline is even more so:

Note the direct quotation: “Grave responsibilities inside and outside the Vatican for the resignation of Benedict.” Says Mons. Negri

Get that? Archbishop Negri is saying that persons other than Benedict are responsible (read: guilty) for his so-called “resignation.”

Many tradition-loving Catholics, friends of mine included, have had it with this entire mess. Francis, in their eyes, is giving us enough to worry about.

Benedict resigned. It was accepted. Francis was elected. And that’s that!

Unfortunately, folks, it isn’t quite that simple. Canon Law is very clear on this matter:

If it happens that the Roman Pontiff resigns his office, it is required for validity that the resignation is made freely and properly manifested but not that it is accepted by anyone. (1983 Code of Canon Law, Canon 332 §2)

Two things are “required” (NOTE: not optional, but required) in order for a papal resignation to be valid; it must be both “made freely” and “properly manifested.”

Setting aside latter, one will notice that the canon does not say, unless, of course, the majority of the faithful are sufficiently fooled into believing that the resignation was made freely when in fact it was not.

If indeed Archbishop Negri’s account is true; namely, that Benedict was under duress due to tremendous pressure to resign coming from both inside and outside the Vatican, then that isn’t necessarily that insofar as its validity is concerned.

That’s not a conspiracy theory, and it’s certainly not mere sour grapes over the fact that Francis is a raging heretic; it’s reality, like it or not.

So, is there reason to believe that it might be true?

Look, I certainly don’t know why Benedict resigned, but one thing that all of us know without any doubt whatsoever is that it wasn’t for the reasons he gave.

This alone being the case, one would have to bury their head in the sand neck-deep in order to deny that the matter is far from well and truly settled.

Moving on, let’s discuss the idea that the Obama Administration put pressure on Benedict to resign.

While this particular allegation is causing quite a stir in political circles, for us it should yield little more than a resounding so what?

Obama is an unapologetic promoter and exporter of homosexual deviance, a genocidal maniac committed to population control, and an anti-Christian terrorist sympathizer if not a closet-Muslim.

It would be more surprising to discover that his Administration wasn’t in some way involved in pressuring Benedict to step down in order to make room for his Argentinian brother-from-another-mother. Ya feel me?

If, in fact, the godless Obama and his minions had any influence on Benedict’s decision to step aside, then all the more shame on Benedict.

In mentioning “what has been published by Wikileaks,” Archbishop Negri is referring to revelations of a Democrat Party operation designed to move the hierarchy of the Church (further) to the political left.

The plan included an effort to foment a so-called “Catholic Spring” via the activities of two associations founded by John Podesta, Hillary Clinton’s campaign chief, Catholics United and Catholics in Alliance for the Common Good – neither of which are truly Catholic.

Speaking of those who travel in political circles…

It’s no secret how our churchmen will react if solid proof ever comes to light detailing the Obama Administration’s involvement in pressuring Benedict to resign.

In response to the Wikileaks revelations, then-head of the U.S. Bishops Conference, Archbishop Joseph E. Kurtz, issued a whimpering little statement that read in part:

“At this important time in our nation’s history, I encourage all of us to take a moment to reflect on one of the founding principles of our republic – the freedom of religion. It ensures the right of faith communities to preserve the integrity of their beliefs and proper self-governance …  I encourage my fellow Catholic brothers and sisters, and all people of good will, to be good stewards of the precious rights we have inherited as citizens of this country.”

Let’s be clear: This “freedom of religion” wherein all religions, even those that oppose Christ, are to be treated equally by the State, isn’t just an American “founding principle;” it is the official position of post-conciliar, Modernist Rome.

This is for whom Spineless Joe Kurtz spoke as he invoked his “precious rights” as a U.S. citizen.

A faithful churchman of Holy Mother Church, by contrast, would have reminded the members of this nation’s political ruling class of their duty to acknowledge the Sovereign Rights of Christ the King and the eminent freedom enjoyed by His Holy Catholic Church by Divine right.

The Kingship of Christ being of no account for the hierarchy of today, it came as no surprise that Kurtz went on to make a mockery of the mission that He gave to His Church, saying:

In our faith and our Church, Christ has given us a precious gift. As Catholics, we hold onto our beliefs because they come to us from Jesus, not a consensus forged by contemporary norms. The Gospel is offered for all people for all times. It invites us to love our neighbor and live in peace with one another.

Make no mistake, my friends, for today’s pantywaist prelates, “love of neighbor” and “living in peace” have nothing whatsoever to do with baptizing the nations; teaching them everything whatsoever that Jesus commanded.

If it did, a man like Benedict never would have been pope in the first place; never mind the firestorm he created by fleeing for fear of the wolves.