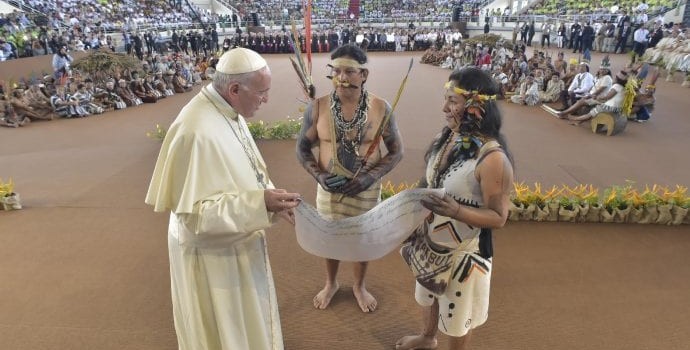 Today, the so-called Post-Synodal Apostolic Exhortation for the Synod on the Amazon, Querida Amazonia, was published. It’s a 16,000 word document, a mere pamphlet compared to other Bergoglian texts. Even so, it will take some time for me to digest.

Right out of the gate (Article 2), however, one finds an extremely important sentence that many, I suspect, will miss:

“I will not go into all of the issues treated at length in the final document. Nor do I claim to replace that text or to duplicate it.”

Here, Jorge is referring to the Final Document of the Amazon Synod that was issued in November. Pay close attention: Nor do I claim to replace it… This means that “Francis,” as he is wont to be known, is bestowing his approval upon the contents of that text in all of its glory.

Readers may recall the motu proprio, Episcopalis Communio, that he issued in September 2018, whereby he ordered changes to the Synod of Bishops. It included the following statement concerning a Synod’s final document:

If the Roman Pontiff granted the deliberative power to the Assembly of the Synod, in accordance with can. 343 of the Code of Canon Law, the Final Document participates in the ordinary Magisterium of the Successor of Peter once ratified and promulgated by him.

We will take a closer look at “can. 343 of the Code of Canon Law” momentarily.

NB: While Francis appears to have refrained from “expressly approving” the Amazon Synod Final Document, Querida Amazonia amounts to an underhanded way of effectively doing just that; he simply reworded the action to say, I officially present it.

His intention in this matter becomes clearer in the next article:

At the same time, I would like to officially present the Final Document, which sets forth the conclusions of the Synod, which profited from the participation of many people who know better than myself or the Roman Curia the problems and issues of the Amazon region, since they live there, they experience its suffering and they love it passionately. I have preferred not to cite the Final Document in this Exhortation, because I would encourage everyone to read it in full. [Emphasis added]

NB: In the present “Exhortation,” Francis is “officially presenting the Final Document!”

Among the things found in that text is the following run-on sentence:

Considering that legitimate diversity does not harm the communion and unity of the Church, but rather expresses and serves it (cf. LG13; OE 6), witness the plurality of existing rites and disciplines, we propose that criteria and dispositions be established by the competent authority, within the framework of Lumen Gentium 26, to ordain as priests suitable and respected men of the community with a legitimately constituted and stable family, who have had a fruitful permanent diaconate and receive an adequate formation for the priesthood, in order to sustain the life of the Christian community through the preaching of the Word and the celebration of the Sacraments in the most remote areas of the Amazon region. [Emphasis added]

Lumen Gentium 26, referenced above, simply describes the authority and the activities of local bishops, who are said to be, among other things, “dispensers of sacred Orders.”

It is for the synod of bishops to discuss the questions for consideration and express its wishes but not to resolve them or issue decrees about them unless in certain cases the Roman Pontiff has endowed it with deliberative power, in which case he ratifies the decisions of the synod.

By way of Articles 2 and 3 of Querida Amazonia, Francis has effectively ratified the decisions of the Amazon Synod as expressed in the Final Document, and furthermore, he is letting the bishops of that region know that he intends to see that text received and implemented as if “it participates in the ordinary Magisterium of the Successor of Peter.” (See motu proprio, Episcopalis Communio)

Long story short, folks, Jorge just gave the green light to the bishops of Amazonia to get busy establishing the “criteria and dispositions” necessary to begin forming and treating “permanent deacons” – the presumption being all of them unless they demonstrate otherwise – exactly in the same way in which the conciliar church presently treats “transitional deacons.”

So, it won’t be long before those bishops begin “ordaining as priests suitable and respected men of the community with a legitimately constituted and stable family.” From there, one can be certain that this practice will spread throughout the conciliar church.

Bergoglian twist on God’s permissive will