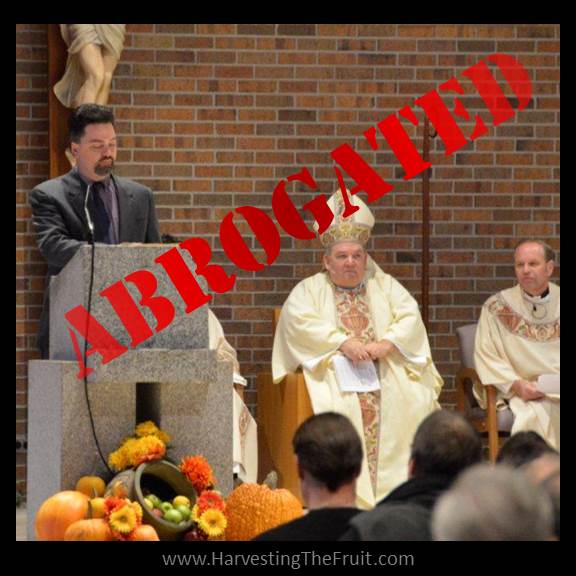 A recent article by Fr. Thomas Kocik on the New Liturgical Movement website, Reforming the Irreformable?, is getting some well-deserved attention in traditional circles. (Do yourself a favor and read it in its entirety if you haven’t already.)

After outlining some examples of “the hack-job inflicted by Pope Paul VI’s Consilium,” Fr. Kocik writes, “The ‘reform of the reform’ is not realizable because the material discontinuity between the two forms of the Roman rite presently in use is much broader and much deeper than I had first imagined.”

I concur with these sentiments entirely.

I must respectfully disagree, however, with his suggestion, “What is needed is not a ‘reform of the reform’ but rather a cautious adaptation of the Tridentine liturgy in accordance with the principles laid down by Sacrosanctum Concilium.”

For one, the principals laid down by Sacrosanctum Concilium are most certainly a part of the problem. Right out of the gate, the Constitution opened the door for the “dumbing down” of the Roman Rite that followed.

This sacred Council desires… to foster whatever can promote union among all who believe in Christ; to strengthen whatever can help to call the whole of mankind into the household of the Church.  (SC 1)

That’s right, the Council Fathers (some naively, others deliberately) made ecumenism one of, if not the, driving force behind the liturgical reforms. This is what the Consilium, with the approval of Pope Paul VI, leveraged as if it was their personal mandate to craft the protestantized product now known as the Novus Ordo Missae.

There are any number of other flaws in the Constitution that deserve mention, but I’ll limit myself to just one more.

The rites should be distinguished by a noble simplicity; they should be short, clear, and unencumbered by useless repetitions; they should be within the people’s powers of comprehension, and normally should not require much explanation. (SC 34)

Though the phrase “noble simplicity” had been used well prior to the Council to describe the traditional Mass (yes, in all of its glorious, triumphalistsic, grandeur), the Council Fathers not only neglected to define it; they coupled it with the preposterous notion that mere mortals like us should be able to “comprehend” the mystical encounter with Christ that is the Holy Sacrifice of the Mass!

This is how we arrived at the simplistic, earthbound service that is inflicted upon the faithful week in and week out in parishes all over the world.

In spite of whatever sensible statements are contained therein (e.g., regarding the use of the Latin language, the value of Gregorian Chant, and the necessity of liturgical instruction as the gateway to active participation), Sacrosanctum Concilium is really nothing more than a wolf in sheep’s clothing, juxtaposing traditional teaching alongside utter nonsense (a favorite tool of the neo-modernists).

Secondly, the idea of “a cautious adaptation of the Tridentine liturgy” given present circumstances is truly the stuff of nightmares.

In a different age, perhaps not, but does anyone really want to see what the current cast of characters in Rome would do to the traditional liturgy if given the chance? Surely the Devil would like nothing more.

If this were to actually happen, a day might come when some poor pope may feel compelled to proclaim “three forms of the one Roman Rite; the Ordinary, the Extraordinary, and the Hybridordinary.”

In any event, the highlight of Fr. Kocik’s article far outshines these points of disagreement as he states:

To draw the older and newer forms of the liturgy closer to each other would require much more movement on the part of the latter form, so much so that it seems more honest to speak of a gradual reversal of the reform (to the point where it once again connects with the liturgical tradition received by the Council) rather than a reform of it.

This is a very bold statement on the part of a parish priest living in this age of “crypto–Lefebvrian” witch hunts. As an ordinary layman, by contrast, I can restate with little fear of waterboarding (I think) essentially the same thing, but just a bit more directly:

The Missal of Paul VI must be abrogated entirely, and the sooner the better.

Yes, I can almost hear the chorus of protests swelling in the background already…

That’s crazy! The new Mass can’t be repealed as if it never existed!

Like Hell it can’t. We survived the Pauline offensive (albeit bloodied and battered); why not its undoing?

Should it be done virtually overnight as was the case when Pope Paul VI unleashed this single greatest liturgical assault the Church has ever had to endure?

No, for one thing, doing so would be almost as merciless. For another, it is far easier to go from enlightened to pedestrian than it is to travel in the opposite direction.

That said, the abrogation of the Novus Ordo could be accomplished in many places (like the United States) in just one year, at least in its initial phase; universally, in no more than three.

This would certainly require an intensive program of liturgical instruction, but there is no doubt that the Church has the financial resources to do it. Heck, many national episcopal conferences (like the USCCB) have the necessary means, if only they’d be willing to shift funding from such core activities as the Environmental Justice Program.

Of course, priests and seminarians in particular would need continued formation in order to move beyond merely speaking the Latin prayers of Holy Mass to actually knowing them, but what is most important at this juncture in salvation history is the suppression of the Novus Ordo and all of its anthropocentric trappings.

As the bitter experience of the last four decades amply demonstrates, the Lord who saw to it that the traditional liturgy endured (in spite of the best efforts of Venerable Paul VI) will freely provide the assistance of His grace when the abrogation of its supplanter is set in motion.

In other words, don’t underestimate the prolific outpouring of Divine assistance the Bride would receive upon rushing into the arms of her Bridegroom in such fashion.

I saw a Novus Ordo Mass on YouTube that was done in Latin, ad orientem, with traditional vestments, incense, Gregorian Chant, Communion at the rail, and it was beautiful! So there!

That’s fantastic; if you liked what you saw, you’re half-way home.

Missing from the new Mass, no matter how well it is done, are such invaluable liturgical treasures as the Offertory, the prayers at the foot of the altar, and others. (Fr. Kocik goes into more detail on this note.)

If a priest is willing to go through all of this just to fancy-up the Novus Ordo, why not celebrate the Mass in all of its integrity?

But the new Mass is the only one most people alive today have ever known, and some will refuse to make the transition, including many priests, creating a split in the Church!

This much is true, but such a painful experience as this must be understood for what it truly is; the demands of justice in action. Why on earth should we expect it to be painless?

But it would inflict real suffering on the innocent!

Of course it would. The Lord our God is a jealous God, visiting the iniquity of the fathers upon the children to the third and the fourth generation (cf Exodus 20:5); i.e., we can thank Pope Paul VI for the suffering, not the pope who one day, God please, cleans up his mess (and summarily halts his cause).

In any case, just as some poor souls following the virtual disappearance of the traditional Mass mistakenly believed (and not without reason) that the Holy Catholic Church that they loved so dearly had ceased to exist, so too would some folks who know no better react to the abrogation of the Novus Ordo as if an irreplaceable treasure had been lost.

In the end, the Just Judge is more than capable of sorting all of this out, if only we return to Him in fidelity.