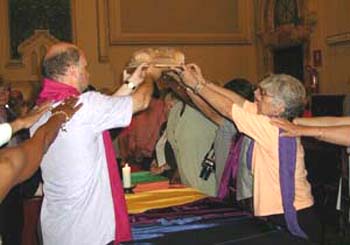 To mark the occasion, most “conservative” commentary seems to be centered on those faithful portions of the text that have been largely ignored; e.g., “Particular law remaining in force, the use of the Latin language is to be preserved in the Latin rites” (SC 36).

I, however, think it far more important to acknowledge the shortcomings of this document; to come to terms with how these have contributed to the protestantization of Holy Mass.

This sacred Council has several aims in view: it desires to impart an ever increasing vigor to the Christian life of the faithful; to adapt more suitably to the needs of our own times those institutions which are subject to change; to foster whatever can promote union among all who believe in Christ; to strengthen whatever can help to call the whole of mankind into the household of the Church. – SC 1

This unfortunate nonsense about “fostering union” as a goal to be achieved by way of the liturgy’s reform set the stage for removing from the rite anything that might be found objectionable to the heretics; the first thing to go being the Offertory, since, after all, “it smacks of sacrifice” as Martin Luther so correctly observed. And we wonder where our sense of the sacred went…

To promote active participation, the people should be encouraged to take part by means of acclamations, responses, psalmody, antiphons, and songs, as well as by actions, gestures, and bodily attitudes. And at the proper times all should observe a reverent silence. – SC 30

Seized upon by progressives, this statement has been leveraged as a command to dole out liturgical activities, as if “doing something” is the equivalent of active participation.

Although the sacred liturgy is above all things the worship of the divine Majesty, it likewise contains much instruction for the faithful. – SC 33

Offered under the heading “Norms based upon the didactic and pastoral nature of the Liturgy,” this underdeveloped proposition has given rise to treating Holy Mass as a teaching moment. Yes, the Holy Sacrifice of the Mass contains what we might call “instruction” in that it forms the faithful to the likeness of Christ who redeems us, but it is not, properly speaking, a venue for teaching.

The Council footnotes the Council of Trent here, but this is what Trent said:

“Although the Mass contains great instruction for the faithful people, nevertheless, it has not seemed expedient to the Fathers, that it should be everywhere celebrated in the vulgar tongue … Pastors are encouraged to expound upon some portion of those things which are read at mass, and that they explain some mystery of this most holy sacrifice, especially on the Lord’s days and festivals.”

The Fathers of Trent are talking about the homily, not about treating the rite itself as if it were a time for catechesis.

The rites should be distinguished by a noble simplicity; they should be short, clear, and unencumbered by useless repetitions; they should be within the people’s powers of comprehension, and normally should not require much explanation. – SC 34

The phrase “noble simplicity” is not new; it had previously been used to describe the traditional rite, and yet, the above directive has served to embolden those who desire an impoverished liturgy, a rite sufficiently brought down to earth such that it is “within the people’s powers of comprehension,” a ludicrous notion given the nature of Holy Mass.

On a similar note:

In this restoration, both texts and rites should be drawn up so that they express more clearly the holy things which they signify; the Christian people, so far as possible, should be enabled to understand them with ease and to take part in them fully, actively, and as befits a community. – SC 21

The idea that the mystical encounter with the Lord effected at Holy Mass can be “understood with ease” is utterly ridiculous.

Even in the liturgy, the Church has no wish to impose a rigid uniformity … rather does she respect and foster the genius and talents of the various races and peoples … Anything in these peoples’ way of life which is not indissolubly bound up with superstition and error she … sometimes in admits into the liturgy itself, so long as they harmonize with its true and authentic spirit … Provisions shall also be made, when revising the liturgical books, for legitimate variations and adaptations to different groups, regions, and peoples, especially in mission lands … In some places and circumstances, however, an even more radical adaptation of the liturgy is needed, and this entails greater difficulties. – cf SC 37-40

It is thanks in part to this encouragement to promote “variations, adaptations,” and even “more radical adaptations” that the Mass has been so customized that even in any given diocese there are as many variations of the Novus Ordo as flavors at Baskin Robbins.

In conclusion, while it is important to point to those all-too-often ignored faithful expressions found in Sacrosanctum Concilium, we are far better served facing head-on the leaven of unorthodoxy contained therein, as most assuredly the entire lump has been corrupted.

What’s it to you?