Home
Blog Post
A growing rift among the “Fatimists” 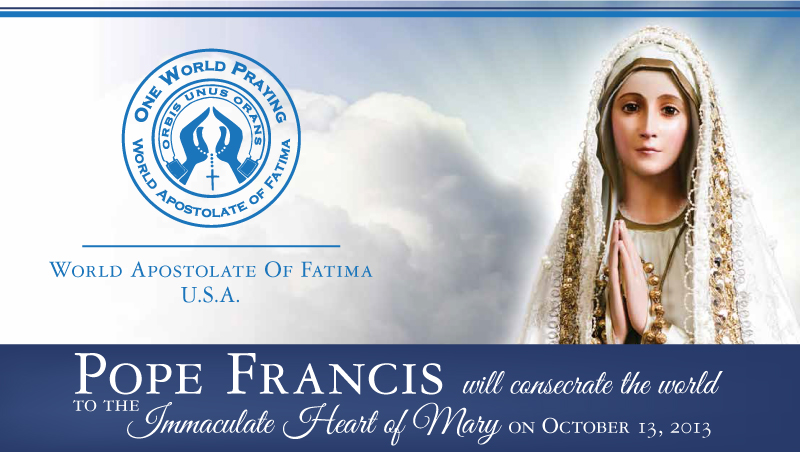 As Cornelia Ferreira mentioned in her inaugural post here at akaCatholic, Fatima Through the Lens of Vatican II: As Illustrated by Raymond Cardinal Burke:

The WAF/Blue Army has long broadcast the Vatican’s Party Line on Fatima. Now an International Public Association of Pontifical Right, it claims it’s “the only Fatima organization in the world which speaks ‘in the name of the Church’ and ‘with the authority of the Church on Fatima.”

Its “charisma” is “the New Evangelization of the world through the authentic Message of Fatima.” Its “responsibility” is to “guard the purity of the message.”

In this, so-called “Fatimists” can find nothing controversial. Indeed, all concerned have long since recognized the formerly named Blue Army, now World Apostolate of Fatima (WAF), as the very definition of a “false friend” of the effort to spread Our Lady’s authentic message.

Where some apparently did find cause for offense was in Mrs. Ferreira’s suggestion that Cardinal Raymond Burke is allied to considerable extent with these enemies of Fatima as reflected in the “distortions and doubletalk” put forth in his recent presentation given at the Roman Life Forum.

She even went so far as to say that “Cardinal Burke’s favored source of information” is none other than the WAF, which, as she pointed out, “was very pleased with his speech.”

In this, she was referring in part to the reaction of David Carollo, Executive Director of WAF USA as given in a blog post on the group’s website under the title:

The simple fact that the WAF applauded Cardinal Burke’s speech is enough to suggest that His Eminence’s words may not represent a “vindication” of Fr. Nicholas Gruner as some claimed.

In any case, it will be informative to take a closer look at what Mr. Carollo had to say. He begins:

A few days ago at the Rome Life Forum, Cardinal Raymond Burke gave a compelling address on “The Secret of Fatima and a New Evangelization,” calling for a consecration of Russia in “recognition of the importance which Russia continues to have in God’s plan for peace and a sign of profound love for our brothers and sisters in Russia.”

Notice the wording, “calling for a consecration of Russia…”

Is this simply Carollo’s attempt at damage control after effectively having been called out by a member of the College of Cardinals for falsely claiming that the consecration was already done, or does it reflect an accurate reading of His Eminence’s words?

Clearly, in my view, it is the latter. Carollo goes on:

While acknowledging his certitude that St. John Paul II carried out the collegial consecration of the world, including Russia, on May 25, 1984, Cardinal Burke said, “Today, once again, we hear the call of Our Lady of Fatima to consecrate Russia to her Immaculate Heart, in accord with her explicit instruction.”

In reference to the “pressure” placed on John Paul II to refrain from making an “explicit reference to Russia” during his 1984 consecration of the world, Carollo wrote:

NB: …to make the consecration again.

At this, Carollo, just as Cardinal Burke had in his speech, quoted John Paul II – the man who bears more responsibility than any other for the massive Vatican cover-up of the Fatima message for which the WAF exists to continue:

“Mary’s appeal is not for just once. Her appeal must be taken up by generation after generation, in accordance with the ever new ‘signs of the times.” It must be unceasingly returned to. It must ever be taken up anew.”

Carollo went on to reiterate in the plainest terms possible one of the central positions held by the WAF; one that also forms a fundamental part the official Vatican deception:

After the 1984 consecration was done, Sister Lucia confirmed that it was “accepted by Heaven.”

Those who, after the example Fr. Nicholas Gruner, are laboring even now for the consecration of Russia as if it has yet to be done; all in anticipation of the promised fruits that Our Lady attached to her request, are wasting their time.

As for how one might be assured that the consecration was in fact done to Our Lady’s satisfaction, Carollo pointed to the following events that unfolded in the Soviet Union thereafter as a sort of proof that it resulted in peace:

– On May 13, 1984 (feast of Our Lady of Fatima) an explosion destroys 80 percent of the Soviet Union’s main munitions storage depot for its largest fleet; two-thirds of its missiles are destroyed

– On Dec. 13, 1984, an explosion in Siberia destroys the Soviet Union’s largest ammunition base

– On April 26, 1986, the Chernobyl nuclear reactor accident occurs and we now know it staved off a planned nuclear strike on Europe in retaliation for the arrival of U.S. Pershing II nuclear missiles in Europe.

– May 12, 1988, an explosion wrecks the Soviet factory that made rocket motors for its deadly long-range missiles.

Three explosions and a nuclear disaster is what passes for the promised period of peace according to the enemies of Fatima.

About the conversion of Russia that was also promised, Carollo suggested that there is evidence that it is indeed taking place as a direct result of the 1984 consecration:

People are converting back to God … Young people, having grown up in atheistic families, are drawn to the beauty, truth and rich culture that the Catholic, Russian Orthodox and other Christian religions provide. I have been to Russia a number of times and can affirm, the Faith is on the rise there.

The “conversion” being peddled by the WAF isn’t a conversion to the one true Faith, but rather one that includes persons entering both the schismatic and the heretic communities!

I trust at this you get the point.

It has become ever more clear in recent days, in ways both public and private, that a “rift” has arisen between persons once united in the effort to promote the authentic message of Fatima.

This division didn’t begin with Cardinal Burke’s speech. His presentation did, however, manage to magnify it.

At this, it would seem beneficial for  all concerned to return to some of the common ground that we share as a launching point for future discussions:

We know very well that the mission of the World Apostolate of Fatima is to distort the true message of Fatima in order to give it the appearance of compatibility with the aims of the “conciliar Church” – the church-of-man that emerged following Vatican II; the very “suicide of altering the faith” that Our Lady wished to preempt.

As such, anyone who actively collaborates with the WAF in its mission of deception, even if unwittingly and with every good intention, is no friend of Fatima.

Surely, all who wish to promote Our Lady’s authentic message after the example of Fr. Nicholas Gruner can agree on at least this much.

Might I suggest that keeping this in mind moving forward will prove useful.