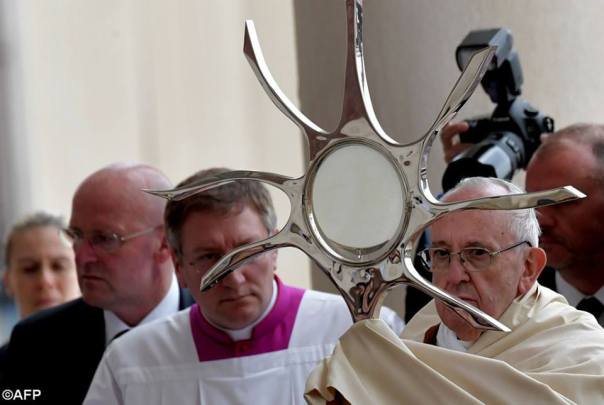 By now, I suspect that most readers have seen images such as the one above. It was taken during Francis’ visit to Fatima where he made a mockery of Our Lady, her warnings, her requests, and, of course, anyone with even a mustard seed’s worth of genuine faith.

What about this image most offends your Catholic sensibilities?

Is it the gigantic frisbee-sized Host; the same that at some point will presumably be broken into dozens of smaller pieces for distribution; leaving in its wake God only knows how many sacred fragments?

Or is it the hideous piece of modernist garbage being used as a monstrance?

While both of these things are offensive indeed, the single most offensive thing about this photo, to me, is the blasphemous old man performing what resembles Benediction.

If you’ve not yet viewed a video of the spectacle, take a look at the footage below. Everything about it drips of fakery and deception; it looks like a poorly disguised pagan proceeding posing as something Catholic.

Is Jesus Christ truly present in that gigantic Host, housed inside that pathetic excuse for a monstrance?

To be very honest, I have my doubts, but it does not seem that Francis has any doubt at all; rather, he gives every appearance of being rather certain that He is not present. (For his sake, let us hope that this is the case.)

After all, this is the same man who can drop to his knees to wash the feet of mere men, but cannot seem to bend them one inch at the altar.

And here he is offering Benediction?

This, to me, has all the markings of a faithless man going through the motions.

If there is any compelling reason to believe otherwise, it has escaped my notice entirely.

The COVID Scientocracy sharpens its fangs