As Pope St. Pius X stated in his magnificent Encyclical, Against the Errors of the Modernists, Pascendi Dominici Gregis, “we must now break silence.”

We do so not with empty howls of protest (even the heathens, heretics, and Jews can do that), but rather as true soldiers for Christ the King – members of the Church Militant, outfitted with truth and well grounded on the firm foundation of Catholic tradition.

In order to prepare for battle, please avail yourself of the resources below. They are being made available here free of charge. I only ask that they not be reprinted for sale, and that you please consider making a donation should you find the content helpful.

Please check back from time to time as more resources will be made available in the future. 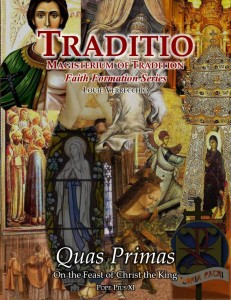 The Feast of Christ the King is a relatively recent one, instituted by Pope Pius XI in 1925 with the promulgation of the Encyclical, Quas Primas. The immediate peril facing the Church as the Holy Father wrote was spiritual in nature, manifesting itself in the temporal order through an increasingly secularized society.

The relegation of Christ’s authority to the periphery was an effrontery centuries in the making – from the Protestant revolt and the French Revolution, to the rise of pluralistic democracies (like the United States) and the decline of Catholic Monarchies.

Even so, it can be said with confidence that Pope Pius XI was a man of great vision, who saw in this terrible regression a pressing need to call mankind, with all the more fervor, to assemble beneath the banner of Christ the King to proclaim and promote His Sovereign rights and prerogatives. Therein lies the purpose of Quas Primas and the most excellent feast it established.

Traditio Faith Formation Series: Quas Primas The Encyclical of Pope Pius XI is reprinted herein (© Libreria Editrice Vaticana) in its entirety, along with insightful commentary, followed by three lessons with Scriptural references that aid participants in coming to a firm understanding of the immutable doctrine concerning the Kingship of Jesus Christ. Suggested responses are included. Suitable for both faith formation groups and individuals alike.

The content of this study guide has been deliberately kept on a highly approachable level. It is ideal for sharing with those who are either new to tradition, or entirely unfamiliar with the Social Kingship of Our Lord Jesus Christ.

Was John Courtney Murray Right? An examination of the Declaration on Religious Freedom of Vatican II

On December 7, 1965, Pope Paul VI officially promulgated Dignitatis Humanae – the Second Vatican Council’s “Americanized” treatment of religious freedom:It was as though an American flag had been raised atop the cupola of St. Peter’s Basilica in Rome, supplanting the Cross of Christ the King; the same that had long since adorned not just the pinnacle of this most famous of all sacred buildings, but the very heart of Christendom itself…

In this brief but high-impact book, Louie Verrecchio compares and contrasts the traditional doctrine of the Church with the novelties that were enshrined in the Declaration on Religious Freedom of Vatican II.

Rather than focusing on minutia, Verrecchio shines the light of Tradition on the foundational planks upon which these two disparate approaches to religious freedom must either stand or fall, providing readers with the insight necessary to decide for themselves: Was John Courtney Murray right?