Li•tur•gi•quette (noun) \lə-ˈtər-ji-kət\: The conduct required by good breeding whilst participating in the sacred liturgy. 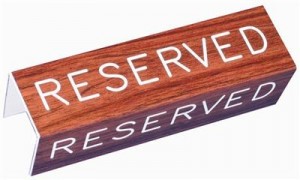 After reading about “endcappers,” I felt guilty enough to write. I’m not an endcapper, but I do have a habit of sitting in the same place at Mass every week – about five pews from the rear on the right, somewhere near the middle of the row. There’s a familiar group of regulars that sit in the same general area, and everyone seems pretty comfortable with this arrangement. I’m ashamed to admit it, but I get really irritated when I show up for Mass early and find that someone else is occupying my normal place. I know I need to let it go, but it’s really difficult!

Thanks for writing. You know you need help and that’s a good first step. I’ll try my best to provide some sound advice.

OK… From what you shared, it sounds to me like you suffer from BITCH Syndrome. Now, don’t be offended; it’s an acronym for the rather common condition – Belligerent Indigenous Territorial Catholic Homesteader Syndrome.

It may be a comfort for you to know that you’re not the only BITCH out there; lots of people have this problem. We Catholics have a tendency to stake a claim on a particular pew, at a particular Mass, in our particular home parish. And even though nearly all of us begin by taking what some other BITCH used to consider their spot, over the course of an amazingly short period of time we start to behave as though we have a timeshare deed for that very space, and woe to the invader who dares to force us to slide two butt’s widths further down the pew.

I’m no psychotherapist, but it seems to me that the first thing you need to realize is that this syndrome is fear driven; i.e., it’s a real, honest-to-God phobia, and in order to conquer any phobia (and I know this because I saw it on a TV reality show) you need to meet it head on.

That means forcing yourself to change your behavior by sitting near the front, on the left, somewhere near the end of the row. Sounds horrible, I know, but you need not do this all in one week; in fact, it’s best to begin by taking relatively small steps.

For example, next Sunday, venture just a few rows away from your “normal” place. The best thing about this approach is that this necessarily means you’ll be taking up pew space in the homestead of those other folks that you now tend to think of as your friendly neighbors; those familiar faces that make your own homestead so comfortable.

Be forewarned: These people are your “friends” now, but you’ll be amazed at how quickly you’ll go from one of the “regulars” to just another filthy invader.

“But, but… I’m Terry… the BITCH who normally sits just two rows back and a little to the left,” you’ll think to yourself as your erstwhile pew pals glare you up one side and down the other.

It’s a real eye-opener to realize that you’re really no more valuable to the other “regulars” than an old shrub in the backyard. They never really cared about you as a person any more than you cared about them.

You see, most of the regulars simply consider the others to be part of a comfortably predictable and unchanging landscape and little more. Like I said, a real eye-opener.

At the end of the day, there’s nothing like walking a mile in someone else’s shoes when it comes to empathy, and once you experience firsthand what it’s like to be viewed as a nameless, faceless invader, chances are pretty good you’ll be well on your way to recovery. 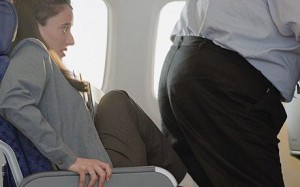 Am I the only who is perturbed by those people who occupy the end of a pew at Mass and refuse to slide over to let other people in? They can sometimes be downright belligerent! What should I do?

Endcappers. Every parish has them; those territorial human obstacles who stake a claim to the aisle seat of their chosen pew and are willing to sacrifice their very person, not to mention every last drop of dignity, just to defend it.

I have a newsflash for you endcappers out there: That’s not what is meant by “the Holy Sacrifice of the Mass.”

No one really knows what gives rise to endcapping, but some experts have suggested that these ecclessial homesteaders have been sent by God as a form of chastisement aimed at those people who come busting through the door during the Confiteor with their hair still wet while desperately clinging to the fading hope of just blending in.

In any event, endcapping is a prime example of poor liturgiquette and it needs to be addressed head-on.

Look, endcappers, Holy Mass isn’t a flight from LA to Tokyo – an aisle seat just isn’t that valuable. Ask any modern-day liturgist and they’ll tell you that the liturgy is all about celebrating the community. Have you ever stopped to consider how endcapping fits in with that? Hmmm?

While certainly less common, even more traditional Catholics (i.e., those relics who still cling to the notion that the Mass is really all about Calvary, Resurrection, Eucharist, Redemption, you know, Christ) have been known to engage in endcapping.

To them I would simply suggest that they take a good hard look at any halfway decent depiction of the Last Supper and make note of where Jesus sat: smack in the middle!

Now, I must say as a matter of fairness, that people with infants and toddlers get a pass, as do those folks who have a medical condition that may require endcapping, but this is pretty rare.

For instance, if you’re like those middle-aged men in the pharmaceutical commercials with an enlarged prostate and feel the need to “go” every 7 minutes (not to mention suffering from the inexplicable urge to run like a nine year old girl en route to the men’s room), you should sit on an endcap. Not only will you be able to see that man about that horse as often as necessary, you’ll also be in a position to shake hands with fewer people at the sign of peace; a genuine win-win.

If, however, you’re one of those folks who has adopted the attitude, “Hey, I was here first, I deserve the seat of my choosing,” then you really oughta reexamine your priorities.

As for what the rest of us should do when an obstinate endcapper blocks our entrance into the pew, that’s a bit more complicated.

Sometimes a simple “excuse me” will cause the wannabe Swiss Guard to momentarily vacate their post by stepping into the aisle to let us pass. (I actually have high hopes for this particular brand of endcapper whose conscience is clearly calling them to conversion.) Unfortunately, it’s usually not so easy…

When you find yourself forced to climb over one of those endcappers who only grudgingly pretend to make themselves smaller, I say we have an obligation to help them see the err of their ways by inflicting some mild discomfort upon them. Think of it as a kind of parental discipline; it’s for their own good.

For example, I think it’s perfectly acceptable to touch them and their loved ones as you pass by, a rather effective tool given the fact that endcappers by their very nature are misanthropes that despise human contact. You might also consider stepping on their shoes just enough to scuff their shine. Be careful, however, not to inflict injury. That’s the usher’s job.

In church’s that have those good old fashioned hardwood pews that are designed more for mortification than for comfort, you might consider doing what I do on selective occasions when visiting a parish out-of-town:

If upon saying, “Excuse me,” the endcapper pretends to be both blind and deaf, simply place one hand upon their hip and the other roughly at shoulder level while carefully applying steady pressure and pushing forward. You’d be surprised how easily a large adult can be shuffleboarded across a wooden pew. Of course, this technique works best when transporting a solitary individual, but I’ve also had some success pew dusting with small families. The kids actually love it!

Finally, never forget that they will know we are Christians by our love. Therefore, during the Mass, be sure to offer in the silence of your heart a prayer for the conversion of endcappers everywhere, that by the grace of Almighty God they will learn how to just scoot the hell over.