Here we go again. The enlightened cognoscenti of the psychiatric community are lowering the bar once more in redefining the new “normal.”

According to the NY Times,

“The fifth edition of the Diagnostic and Statistical Manual of Mental Disorders (due out in 2013, and known as DSM-5) has eliminated five of the 10 personality disorders that are listed in the current edition. Narcissistic personality disorder is the most well-known of the five…”

It seems to me we’ve seen this science fiction flick before. In 1973, the American Psychiatric Association officially declassified homosexuality as a mental disorder in the “Diagnostic and Statistical Manual of Mental Disorders” (DSM); a move sparked not by reliable clinical evidence but in response to homosexual activism.

Could the APA’s latest treatment of narcissism be just another battle in the very same war against nature?

In an interview conducted for an article I wrote for Catholic News Agency in 2011, The liturgical impact of homosexuality in the priesthood, world-renowned psychiatrist and expert on same-sex attraction, Dr. Richard Fitzgibbons, said:

“Narcissism – a personality disorder in which an insatiable need for admiration often leads to attention-seeking behavior – is prevalent among men who struggle with homosexuality.”

In time, I suspect that we will discover that the pending declassification of narcissism in DSM V is the handy work of the very same activists who, after having successfully forced the APA to scrub homosexuality from the list of treatable mental disorders, are now looking to do the same with the subcategory of disorders that are so closely associated with it.

As LifeSite News reported last August, activists have been plotting to pressure the APA to change its approach to what they call “minor-attracted persons,” a group that travels very comfortably in homosexual circles. (See the North American Man Boy Love Association if you can stomach it.)

With the Left’s desire to redefine the Judeo-Christian understanding of marriage and family by any all means necessary, and the tendency of government run healthcare (e.g., such as exists in England) to limit access to services if for none other than fiscal reasons, one can reasonably assume that Obamacare will only further fuel the activist takeover of the APA in years to come.

Have you ever seen those bumper stickers that say VISUALIZE WORLD PEACE? For some reason, they often seem to be plastered right next to some kind of MOTHER EARTH sticker. Maybe they’re sold in pairs. I don’t know.

At any rate, when I see one of those dopey stickers on the car in front of me at a red light, I’m tempted to go up and tap on the window and say:

“Hey pal… Do you really want to visualize world peace, not just some fairy tale version of tolerance, but the real thing? OK, work with me here… Close your eyes and picture this: a world in which each and every human being on the planet is a fully incorporated member of the Holy Roman Catholic Church.”

I wonder how that would go over? My guess is not very well, but that’s no reason to beat around the bush:

A world in which every single human person is Catholic – not just in-name-only “catholic” or “I-voted-for-Barrack-Obama” catholic, but truly Catholic, this is exactly what world peace would look like.

How do we know this? The very definition of peace is resting God’s will, and the Lord our God wills that every single human person be fully incorporated in the only Church He established, the Catholic Church. Shocking? It shouldn’t be; this is one of the most fundamental truths of our Catholic faith.

Now, we all know we’re not going to get there. We know that the fullness of God’s Kingdom of peace will only be fully attained at the end of the age, but that doesn’t change our duty to strive for it in the here and now, and the way to strive for world peace is to strive for a world in which every single person on earth is Catholic.

Go ahead; visualize it. That’s what world peace looks like.

I recently had the great pleasure of presenting a Harvesting the Fruit of Vatican II Workshop for the Archdiocese of Denver, as well as addressing the 14th Call to Holiness Conference in Detroit, MI. If your diocese, parish or organization is interested in hosting a presentation or workshop focusing on the Second Vatican Council for the Year of Faith, send an inquiry to info@harvestingthefruit.com.

As I write, my beloved uncle, who has been suffering for the past several years from a parasitic infection that has weakened him significantly, is undergoing a life-saving heart operation. The procedure is complicated and is expected to last upwards of 18 hours. The chances of his survival, realistically speaking, are only about 50/50, but apart from this, his rapid deterioration is all but assured. So please, join me in offering heartfelt prayers of intercession for my Uncle Sam, that his caregivers from coast-to-coast will be successful in restoring him to good health today. Thank you in advance. 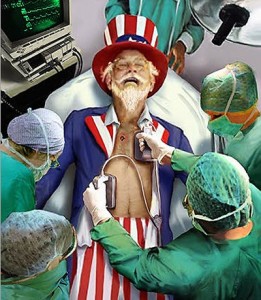 UPDATE: Things didn’t go very well. We didn’t realize that slightly more than half of the OR Staff lacked common sense, and a goodly number of them didn’t even have a pulse of their own. The good uncle is on a respirator and in desperate need of a priest for anointing. Keep praying…

Who is your King? 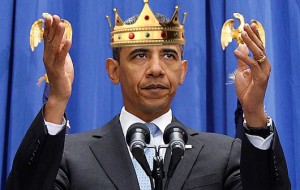 “These will be the ways of the king who will reign over you,” says the LORD… “He will take the best of your fields and vineyards and olive orchards and give them to his servants. He will take the tenth of your grain and of your vineyards and give it to his officers and to his servants. He will take your menservants and maidservants, and the best of your cattle and your asses, and put them to his work. He will take the tenth of your flocks, and you shall be his slaves. And in that day you will cry out because of your king, whom you have chosen for yourselves; but the LORD will not answer you in that day.”

For the last three plus years, the United States has been reaping the just rewards, not of a nation that has forgotten the principles of its Founding Fathers, but of a Church that has gone astray by turning its collective back on Christ the King.

I could go on, but presumably you get the point. The single greatest underlying cause of the nation’s most serious challenges, both economic and social, is really no different than it was for the people Israel some 3,000 years ago: far too many of us have forgotten who our King is.